After a silly, cartoon-like beginning, we come upon the statue of Godefroid de Bouillon when it was still surrounded by rails. Next we see the Grand Place where the Maison du Roi is falsely presented as the Royal Palace. Then it’s off to town hall and the armada of horse-drawn carriages lined up along the sidewalk.

You will also see a dressing of Manneken-Pis before climbing aboard a tram headed north towards the former North train station. They pass in front of the Bourse and go through the Place de Brouckère; the center sculpture you see is now in the Sainte-Catherine neighborhood.

The all-in-one map that includes access to 39 museums within the capital extends a little more. 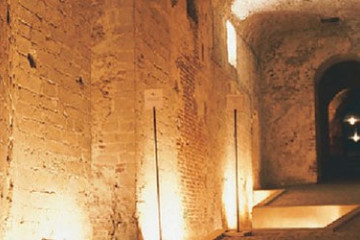 What lies below Place Royale?