Like all big cities, Brussels holds a rich cultural heritage through its museums...

That can be described as either unique, exceptional, or beautiful. Each of these museums has masterpieces. The Iguanodons, the luthéal, the liner clock ... and many other centerpieces to discover, so follow us !

At the Musical Instruments Museum, your eyes will surely stop on a very rare instrument. There is only one copy, and it is in Brussels that you can admire it. Ladies and Gentlemen, here is the luthéal. Invented by Belgian George Cloetens in 1919, it is not an instrument in its own but rather a device that can change the tone of the notes produced by stringed instruments. The mechanism consists of various metal devices which offer additional sounds that remind us of the sound of the harpsichord. After your visit, do not hesitate to dine on the terrace at the top of the building, it has a breathtaking view of the city center!

All roads lead to the Cinquantenaire!

Have you ever visited Rome ? Have you ever wondered what the eternal city looked like in the days when Julius Caesar was flaunting his superstar legs ? You should know there is a monumental and highly detailed model at the Cinquantenaire Museum. Stroll along the Via Appia, enter the thermal baths, feel the excitement of the gladiator fights at the Circus Maximus ... This tour allows you to explore every corner of the city. In addition, the multimedia demonstration that accompanies the model of Rome provides an extraordinary dimension to the experience!

Tintin and the Broken Ear, does it ring a bell? This fetish piece which inspired Hergé is exposed at the Cinquantenaire Museum! An emotional moment for the fans of Tintin ... and an incentive to plunge into the adventures of the reporter for the others ... Hergé visited the museum in the 30’s when he was preparing his albums and was inspired whilst falling nose to nose with the fetish piece. The original is actually a statuette of a Chimu offering bearer with both ears intact. The workshops of the museum have put a plaster reproduction of the fetish on sale for a democratic sum in comparison to typical merchandising. The Rascar Capac's mummy which opens "The 7 Crystal Balls" album with a bang is also exhibited at the Cinquantenaire.

A clock that goes to sea!

Take the direction of one of the most original museums of Brussels: welcome to the Clockarium. In the midst of this collection of clocks, you won’t be able to miss the liner clock. Edited at the launch of the "Normandie" in 1932, this earthenware reproduction bears the characteristics of this mythical liner: the different bridges, rafts and smoking chimneys, all resting on blue seas. And at the centre of the hull stands a glass mounted pendulum: fascinating

Jean Roba has lost his 2 CV

If Jean Roba is not the most famous Belgian cartoonist, his heroes, Boule and Bill toured the world! Proudly sitting in the lobby of the Belgian Comic Strip Center, is the red « Deux Chevaux » car from the family's mischievous child and its teasing cocker spaniel. A true museum piece, this little red racing car has no cause to be envious of its luxurious big brothers. Here, no rearing horse on the car body but instead, dedications: Papa Smurf covers the back fender and rubs shoulders with other famous signatures: Dupa, Tibet, Morris ... Originally, it was a gift from the Editions Dupuis to celebrate the 1,000th joke from the happy duo. Roba then donated it to the Belgian Comic Strip Center. In the lobby of the museum, the car is displayed alongside the rocket of Tintin.

Flying above the clouds is a childhood dream shared by many of us! It became reality in the twentieth century with the construction of the first flying machines. The Royal Museum of the Armed Forces and of Military History offers a unique collection of old planes. Stroll through this space of the size of a football field to admire these little wonders and stop for a moment near the Schreck FBA type H floatplane. The first of its kind! Built in 1913 by Louis Schreck, it is the ancestor of today's seaplanes. You will be surprised by its small size, thus some imagination will be needed to imagine it in the air with a pilot at its command.

A letter from the king

The BELvue Museum houses many objects that belonged to Albert I, the third king of Belgium: photos, medals, busts, paintings, but not only ... Among these souvenirs, a letter written by the king deserves our full attention. This is a letter sent to William II, the last German Emperor in 1914. It was a final diplomatic attempt to avoid a German invasion of the neutral territory of Belgium. However, this last-ditch effort did not succeed because Germany invaded Belgium in August 1914 !

Gather your missals, candles and other rosaries, and make your way to the Museum of the City of Brussels. You will discover a monumental work that describes the life of the Blessed Virgin: the altarpiece of Saluzzo. You will be amazed by this unique masterpiece made with extreme precision. Covered with gold leaves, the carved and painted decorations of the masterpiece were very finely made. The polychrome work is nevertheless marked by an extensive use of the colour blue. Once closed, this same altarpiece illustrates the life of Joseph!

The resurrection of dinosaurs!

At the same time as he was ruining his shorts on the benches of the public school, the little Belgian discovered the iguanodons with amazement: these land monsters carried him at lightning speed to prehistoric times. Want to make a leap in time? Meet at rue Vautier and its famous window where dinos parade. Surrounded by a massive herd of iguanodons, you'll be projected 130 million years backwards. The 29 reconstituted skeletons discovered in the late 70’s at Bernissart were extracted from the depths of the earth for your greatest pleasure. From tiny spiders to a gigantic sperm whale, the permanent galleries of the Museum of Natural Sciences transport you on a trip around the world and through the milleniums.

Do you remember the myth of Icarus ? The tragic fate of the man with wings of wax that had wanted to approach the sun a little too close. Pieter Bruegel, Flemish primitive from the sixteenth century wanted to represent this legend on an oil painting in 1558. The "Icarus's failed" is exhibited at the Royal Museums of Fine Arts of Belgium. It shows Icarus after his fall into the sea, his legs coming out of the water. A farmer and a fisherman are attending the scene: a mixture of genres and eras! You had to be from Brussels to be able to imagine Icarus falling besides a caravel and a fisherman! You will be amazed by the accuracy of the painter and the colours he has chosen.

Don’t exhaust yourself, it is not nap time yet ! Brussels hosts more than a hundred museums which are full of treasures that you have yet to discover ...

The House of European History 18 juillet 2017

The newly opened House of European History takes visitors on a journey through the myths, discoveries and chaos that have shaped today’s Europe.

Brussels Sight Jogging is the unique occasion to observe Brussels wearing trainers! How? Your guide will show you the city around. And throughout the...

China in the heart of Brussels museums

Of course, discovering China and 'Asia in Brussels necessary starts our ends at the capital's museums which divulge the 'Central Kingdom's mysteries....

Small tour of the Brussels Museums

House of Manneken-Pis, of Folklore and Traditions

An artistic and convivial meeting place in the heart of Marolles

Discover new perspectives in the exceptional setting of WIELS 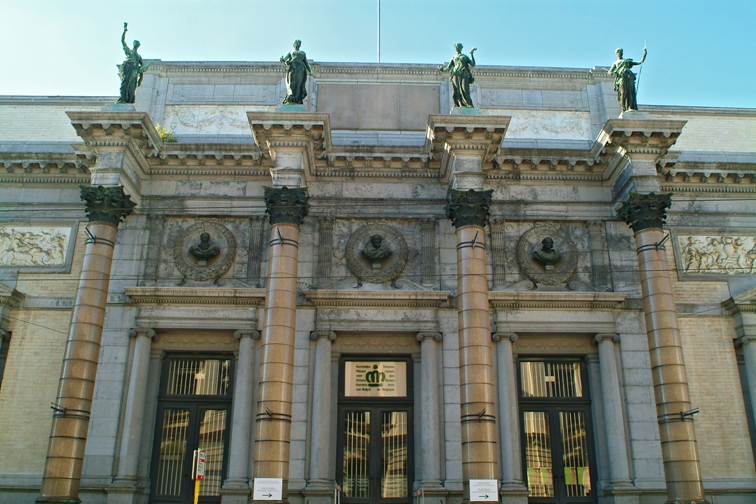