Written by Olivia Regout - 10 Sep 2013, 00:00 (Updated: 12 Jan 2022, 04:27)
What is both little and big, green, blue and red, sharp or blunt, look like an aquarium, a carrot, a bumble bee, a cowboy, and can even resemble Batman… ? Why pencil graffiti of course! Fun spray paint designs all over Brussels that you have surely passed by a hundred times without really noticing. It’s time to open your eyes because BrusselsLife is going to delve into this obsession with crayons…

Hey you, over there! Yeah, that’s right, you with your head in your phone. If only you lifted your head once in a while! You can risk tripping on the rickety sidewalks of the capital and look up and enjoy the scenery bit. You will find that Brussels is an open air museum where street art has found a home.

BrusselsLife took their own advice and put away their cell phones to appreciate the city landscape. Right away we were bombarded with graffiti… of pencils! You might be thinking, “Hmm, I know I’ve seen something like that somewhere… but I can’t put my finger on where…”

Once we became conscious of the fact, we too started noticing this pencil theme everywhere in Brussels: on walls, store blinds, electrical boxes, telephone stalls… all the way to the outskirts of the highway! According to records, there are close to 400 pieces of pieces graffiti art in the city. The numbers are always changing as the paintings disappear and reappear and as the city evolves. 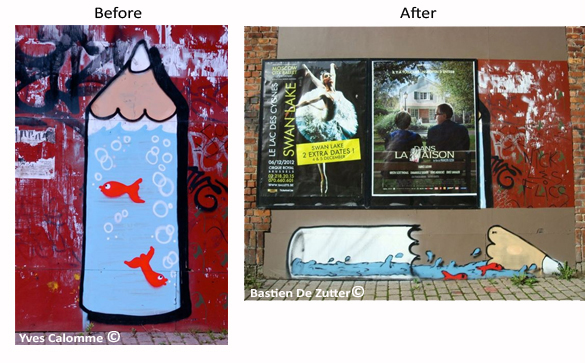 Since the end of summer 2010, pencils have been showing up in waves in Brussels. Yves Calomme, specialist in this phenomenon, explains what he has observed over time: “The evolution of the pencil has gone through many stages. In the beginning, they were simple and sharp. Then they gradually started to be drawn around the corners of walls. The artist added legs to them, made them into lady bugs, made them into Indiana Jones. Then they were drawn undressing themselves and even riding a camel…”

Who is behind this aerosol art?

We never know where the art will show up next. Nor can we guess the form that the next pencil will take. The artist sneaks during the night to spray these little colorful sticks. And like magic, when the sun rises, your street is marked with an original drawing.

The hot question: who is this graffiti artist? Unfortunately nobody knows or wants to know the response. Graffiti is a bit of a sketchy subject, since the authorities are always keeping an eye on these sorts of things.

There is thought to be several artists responsible. Connoisseurs have managed to distinguish different stroke styles in the drawings. Certain ones are more detailed than others. According to Yves Calomme, “There is collaboration between the artists. They communicate with each other. There is an exchange going on concerning this pencil graffiti.” 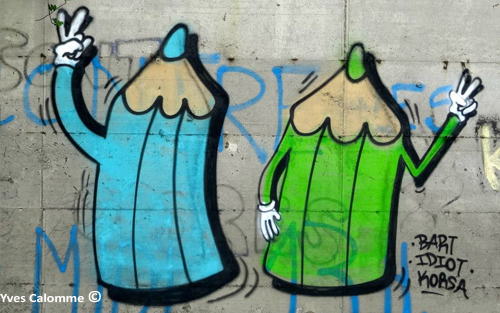 The artists’ identities are still a mystery, but sometimes we can find names sprayed on the side, such as Korsa, Bart or Fist.

Secrets from the experts

Since we aren’t able to put a name to the artists, we found the next best thing – three street art enthusiasts who told us their experience. They know these pencils like the back of their hands.

We can introduce Phil as a pencil hunter. After he found several in his neighborhood and then added pictures of them to his blog, his friends told him about others. “I quickly found myself with 20, 30, 50 pencils to work with! This artist is everywhere. I really appreciate the poetic and creative side of these pencils.”

“At the end of October after about 2 or 3 months of hunting, a slightly crazy idea came to me: I posted a comment to my pencil album on Flickr saying, ‘It’s my birthday in June, I live on rue Untel… if you could draw a pencil for me in my street I would be the happiest person around!’ And then at the end of December 2010, I went out to get some bread, and I stumbled across a pencil that was dedicated to me.”  Since then, Phil has continued to collect photos of the pencils on his Flickr account. “I’ve gathered close to 400.”

Yves Calomme loves this city. He explores every inch of the city in order to discover all urban art. In all of his wonderings, he has definitely not overlooked the pencil graffiti: “I really like it. It’s funny and well-done. And it’s always evolving too.”

He puts his pictures together on Facebook. “At the start, the pencils were concentrated in the Ixelles district mostly on rue de Collège, rue Van Aa and around Saint-Boniface. One day Phil found a pencil that was dedicated to me on a trash bin in Ixelles. But right now the bin has been moved, and I don’t know where it went. Maybe someone has seen it somewhere...?” 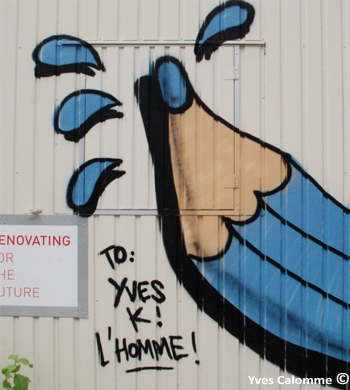 Bastien De Zutter is the third enthusiast that we met. “I like the idea that you can attribute different themes to the pencils. This subject allows for plenty of positive, happy and fun associations… I also like the relationship with games and childhood. I think that was a good choice.”

Bastien is a sporty guy at heart. In October 2012 he organized a pencil marathon, a run around the city that visits 77 drawings. He widely distributed all the information about the event and the itinerary of the day. “When I started getting to know the route in the weeks beforehand, I saw new pencils on the route that I had established.”

The pencil art is not only a game between the artists but between the collectors as well. The goal is to hunt down graffiti that has not yet been discovered in the most far out and random places, even abroad. Pencil art was discovered as far as Barcelona and Amsterdam, probably where one of the artists was vacationing.

So this is a game open for everyone; it is up to you to be the first to notice the new paintings!

Pencils are an infamous part of street art in Brussels. Next time, we will dive into the collection of octopi which are often signed by “olo.”