...By forming the Bruxelles Raiders, a club that no longer exists today.

This is a team sport that combines physical power and tactics. Everyone, no matter your size or build, has a place on the field. Each position demands different qualities: the linebackers are strong and quick, the tackles are like solid barriers, the corners and receivers have lots of endurance.

The team has one objective: score points by bringing the ball into the other team’s touchdown zone or by kicking it, like in rugby, through the field goal. To stay on the attack with possession of the football, the team has 4 chances to advance at least 10 yards. If you don’t succeed, the other team gets to attack.

In Belgium, teams play in their respective leagues (French and Dutch speaking) between February and April. The best teams move on to the national championships which concludes with the Belgian Bowl.

In Brussels, there are 3 clubs: the Brussels Black Angels, the Brussels Bulls and the Brussels Tigers. On the outskirts of the city, the Warriors have set up in the plains of Waterloo.

We tested out American football

It’s decided. In order to better understand this discipline from the land of Uncle Sam, I needed to try it out! My American colleague didn’t give me a choice: “Fret, you have to contact the Brussels Tigers. They have won the Belgian Super Bowl three times!” I later learned that her dad is an unconditional fan of the Auburn Tigers, an American university team that fills a 90,000 seat stadium at each of their games. Homonymous teams…

As I entered the Tigers’ locker room, I got ready for a completely different experience… After introducing myself to the coach, Pascal, the president and my guardian angel for the day, helped me with my equipment. A helmet and shoulder pads are mandatory for practice. Time to get on the field at the Evere sports complex. While I was contorting myself to get my jersey overtop my shoulder pads, the captain of the Tigers doesn’t stop teasing me. Pascal, nicknamed Scale, came to my rescue once again… finally I’m ready!

After a brisk warm-up and drill session conducted GI style, the group split up depending on position. I of course joined the beginners, and my training started for real. Between technique, vocabulary, and tactics, I got a little lost… 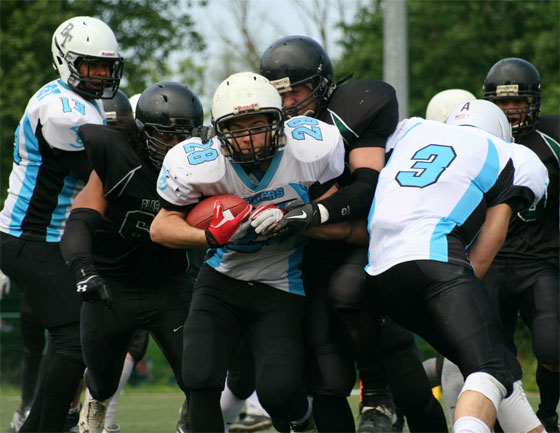 Everyone eventually came back together to scrimmage. We separated into defense and offense. I got assigned as cornerback, at the end of the defensive line. During training, no tackling is allowed. Whew, I was reassured that I wouldn’t become the meat for the next tailgate. The shoulder guards and helmets knocked together with a thud. I started getting a hang of the game and gave the offensive receiver a hard time.

At the end of the practice, Alexandre De Coninck, known as Carmelo, set the record straight: if the Tigers wanted to win a fourth championship ring, they needed to have more fighting spirit. Get at it, Tigers, go for the win!