Written by Olivia Regout - 26 Aug 2014, 00:00 (Updated: 12 Jan 2022, 04:32)
In Cédric Dumont’s world, passion is synonymous with action. With more than 10,000 dives behind him, this 42 year old guy from Brussels could make even the most daring of our readers go pale. Base Jump, wingsuit flying, parachute… this adventurer hands himself over to the laws of gravity across the whole world. Free fall is his obsession.

Cédric Dumont is an outdoor sports guy, to put it simply. “I started doing sports where you slide at a young age, like skiing, surfing… I was always skimming the surface of this world. At 20 years old, I did my first parachute jump in California. I really enjoyed this combo of sliding and flying sensations. I like sports that allow me to be in contact with the elements.”

Today, Dumont is 42 with a countless number of jumps behind him. He has added other disciplines to his passion for parachuting like Base Jump or even wingsuit flying. “My favorite is wingsuit which is the most like flying. I do more and more skydiving in the new vertical wind tunnel in Charleroi.” 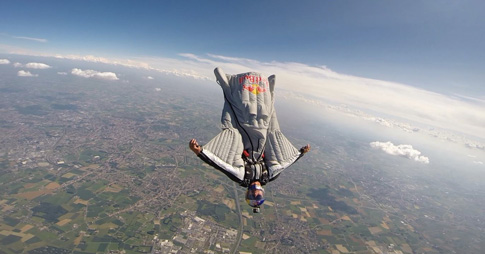 Besides the feeling of flying, the freedom, and the speed, what Cédric Dumont likes the most about his jumps is the risk management and the fear. Technique also holds importance. “The more technique and competencies you have, the better you are. The more experience, the more fun.”

When we asked this focused athlete what state of mind he is in before a jump, he responded, “I have the feeling of ultimate freedom but also a bit of fear that is necessary, by the way. Being scared makes you conscious of the environment and of danger. If you aren’t scared, you are unconscious.”

Like a good Brusseleir, Cédric Dumont practices his passion in the city. His last exploit was a 140 meter jump from the top of the UP-Site tower. At the rare moments when his feet are on the ground, where do they take him?

Your favorite spot to spend a nice evening? I don’t go out a lot, but I see my friends often who live all over Brussels: Dansaert, Louise, Flagey…

Your favorite cultural place? I like to visit the galleries in Brussels in the Antoine Dansaert neighborhood, A.L.I.C.E. in particular.

If you had to show a foreigner around Brussels, where would you go first? I would take them to the Danseart neighborhood and to the Halles-Saint-Géry.

What is the best part about Brussels? What I like about Brussels is that I grew up here and studied here. Here is where a lot of my friends are.

What is the worst part? Looking for a parking spot! But, at the same time, I don’t think that cities are made for cars. That needs to change.