Medieval Brussels: going back to the source

Written by Brusselslife Rédaction - 21 Feb 2022, 00:00 (Updated: 21 Feb 2022, 16:19)
Get ready because today we are travelling through time to discover Brussels in the olden days. What did this capital look like in the Middle Ages?

Get ready because today we are travelling through time to discover Brussels in the olden days. What did this capital look like in the Middle Ages? What sorts of traces are left from the past?

We are talking about a time when Brussels kept a handkerchief in pocket, when the city was surrounded by impassable fortifications and where crossbowmen shot their arrows in defense of this land.

Let’s dive into the 13th century, the time of the Dukes of Brabant. Brussels had between 5 and 10,000 inhabitants and was becoming more influential, which provoked the interest of enemies. It was thus necessary that the city be fortified with walls.

The first wall was built 7 meters high and stretched for 4 km around the city. The wall was 2.3 meters thick. There were only 7 gateways to access the city. From high up on one of the 50 fortification towers, soldiers watched over the countryside, ready to respond to any sort of aggression.

What did Brussels look like in medieval times? Life flourished around three areas: Saint Géry Island and its merchant port, the Coudenberg castle and the collegiate church Saint Michael and Saint Gudula.

It became evident very quickly that the wall fortifications could not contain the expanding city. More protection was needed for the suburbs outside the first walls. A second one, this time 8 km, was built a century later. It followed what we know now as the little belt around the city or the “petite ceinture”.

As soon as night fell, the gates to Brussels would close. Bells would ring to announce their closure. Too bad if you were late; you would have to spend the night outside the city.

The Coudenberg Palace makes up one of the indispensable vestiges of the Middles Ages. To get to it, you had to climb to the top of the Coudeberg hill, today called Mont des Arts. From the 11th century on, the Counts of Flanders built a castle at the top of this hill that would not stop expanding and being embellished for the next 600 years. The Dukes of Brabant and Bourgogne followed by Charles Quint and the Archdukes Albert and Isabelle would call this their primary residence. In 1731, the Palace was destroyed by a fire…

Vestiges from the past in the city

Even if it’s past the time for these two historic walls, the Coudenberg Castle and the rest of the medieval city, some traces from the past are still hidden in Brussels.

Remains of the 1st wall

The Tour Anneessens is located at the foot of the Sablon, all along the Boulevard de l’Empereur. Soldiers defended the Rue Haute from the top of this tower. This part of the tower, very well conserved, still shows the arrow slits. These are very narrow and long windows made it possible to shoot arrows without getting hit back.

Go down the Rue de Villers next to Place de Dinant to discover the wall and the Tour de Villers also called the Tour Saint-Jacques. Sit on a bench and daydream about older times.

Behind Sainte-Catherine, the Tour Noire is built into the new Novotel. Charles Buls, a former mayor of Brussels, saved the tower from destruction in extreme circumstances. This short tower right in the middle of the city has stood the test of time. 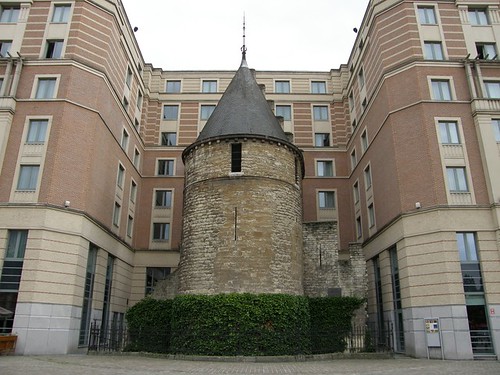 Many remains are hidden on private properties in Brussels. This is the case for the Tour du Pléban and for the part of the gate leading to the Porte du Treurenberg that is located behind the Cathedral of Saint Michael and Saint Gudula. These towers are perfectly conserved and are found in the gardens of the homes on Rue du Bois Sauvage and notably for the dean’s garden. The Palace of the Beaux Arts also houses a tower, but it is only visible on rare occasions…

Remains of the 2nd wall

One of the only remains from the second wall is the Porte de Hal. The rounded façade has hardly changed since it was constructed in the 14th century. The current neogothic style is due to the architect Henry Beyaert who transformed the Rue Haute side and the top of the building from 1868-1870. Today it’s a public museum. You can see permanent collections devoted to life in Brussels during the Middle Ages.

Other than the Porte de Hal, there are no other remains from the second wall. Except a little bit in the metro station Hôtel des Monnaies that was discovered during construction work in 1982.

Underground tunnels of the Coudenberg Palace

The Coudenberg Palace was ravaged by a fire in 1731, leaving it with nothing left. It was replaced by the Royal Palace in 1780 on top of the ruins. Is there really nothing left? Not exactly… Underground the Place Royale hides some archeological relics from Coudenberg.

Today, you can go 6 feet underground for a guided visit. You can also discover the area underground the living quarters of the castle, the kitchens… And especially the famous state room, “Aula Magna”, where Charles Quint was declared king at 15 years old and where, 40 years later, he would abdicate.

In 1238, a Franciscan convent is set up on the banks of the Senne river, right next to Saint Nicolas church. The discovery of the ruins was in 1988 when the Bourse was being renovated. Notably, this archeological site was the location of Duke Jean the First of Brabant’s tomb, who died in 1294.

The Saint-Nicolas church is one of the first 4 churches in Brussels. The church no longer exists in its initial 11th century Roman style, the church’s alter still has the 1381 style.

In the back of the church, you can still see a canon ball stuck above the door dating back to the bombardment of 1695.

When the Middle Ages awakes from the ashes

While ruins in Brussels rest peacefully underground the capital, once a year the medieval city is revived. The Ommegang festival honors Charles Quint with shows and reenactments. Accompanied by archers, crossbowmen, fencers, and horsemen, the Emperor will make his Joyous Entry.

For the 3 days of Ommegang, discover one of the oldest remains of Brussels immaterial heritage: equestrian sparring, falconers, crossbow shooting contests… A true medieval village.