The great moments of Her Majesty Queen Fabiola

Today (12 December 2014) is her funeral, so let's go back in time about the fifth queen of Belgium. From her first salutation on the balcony of City Hall to her last one, her Brussels life was filled with many big moments, sometimes tough, others happy.

Engaged to the King Baudouin

On 16 September 1960 at 12:20 pm, the Belgians are surprised to learn the engagement of their King with a certain Fabiola who no one has heard of. The young couple got engaged the next day at the Castle of Ciergnon. The media immortalised this moment of the first pictures of the future Queen of Belgium.

The people from Brussels will have to wait a few days before finally meeting her. On 24 September 1960, the King introduced his future wife. The parade took both of them to City Hall in a shower of confetti. After signing the golden book, the couple went on the balcony of City Hall to greet the mass gathered on Grand Place.

The wedding of Baudouin and Fabiola

On 16 December 1960, the fate of Fabiola de Mora Y Aragón is forever bound to those of the King Baudouin and of all Belgians. While the country is currently hit by a general strike against the unique law, this royal wedding is a small truce during this social conflict. The civil ceremony at City Hall is followed by a religious Service at the Cathedral des Saints Michel et Gudule.

The very famous sports journalist, Luc Varenne, comments the events live on the radio. The royal escort almost seems to be like a peloton of cyclists…

To pay tribute to the new Queen, the group Rudy Lang and the Belgians Strings markets a new disc called "Fabiola".

After the death of Queen Elisabeth in 1965, Queen Fabiola took over the prestigious Concours Musical International Reine Elisabeth de Belgique under her High Patronage. A role that she took very seriously for 48 years...

The year 1990 is marked by two anniversaries: the 60th birthday of the King and his 40th anniversary of reign. On this occasion, the royal family organises a big party that is meant to be foremost popular. The festivities are launched on September 7 at the Royal Palace on the birthday of the King and lasted until the 21st of July 1991 (Belgian Independence Day). They ended in the different palaces of Heysel with concerts and massive fireworks at the Atomium.

Embrace with a victim of AIDS

At the dawn of the 1990's, AIDS became a public health issue. In Brussels, the Hospital Saint-Pierre was the reference point in matters related to AIDS. The Queen Fabiola paid them a visit in the early 1993 to know more about this virus which wasn't widely known yet. During her visit, she embraced a patient infected with AIDS. This gesture was very strong in a time when many still believed the desease could be transmitted by simple touch. 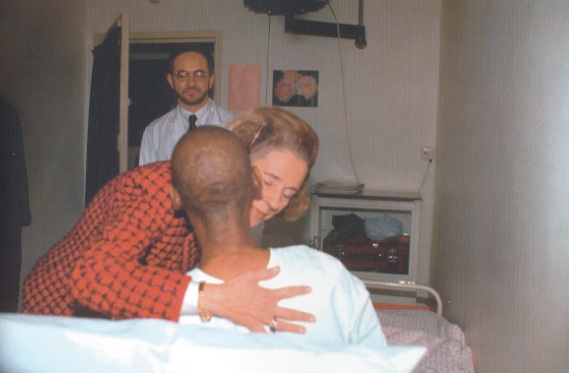 During her entire life, the Queen Fabiola devoted herself to many causes: young women prostitution, human slavery, people with handicaps, etc. She also gave her name to several institutions, among which the university hospital for children (Hôpital universitaire des enfants Reine Fabiola) in 1986.

Death of the King Baudouin

The King Baudouin died of a heart attack during his holidays in Spain on 31 July 1993. His funeral took place on August 7 in the Cathedral Saints Michel et Gudule during a ceremony that the Queen Fabiola wanted to be a mass of glory and hope. She chose to wear a white attire, color of resurrection and of morning for catholic queens. This image of the widow of the King of Belgium will be one that lasted the longest. 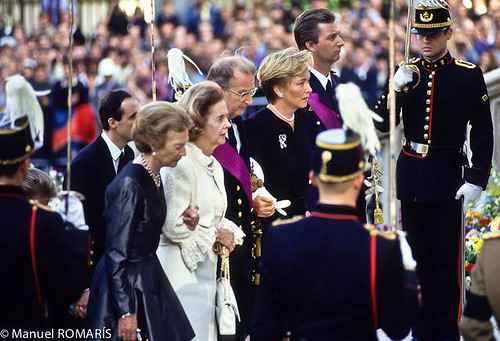 Inauguration of the King Baudouin Stadium

Following the incident at the Heysel in 1985, the 1990's were used to rebuild and renovate the entire stadium. They were also renamed "Stade Roi Baudouin" and were inaugurated on 23 August 1995 by Queen Fabiola herself.

She paid tribute to her late husband as much as she could. She will also present for the inauguration of his statue in Uccle and the metro station Roi Baudouin.

A few days before the Belgian National Day, the Queen received an anonymous letter. Its author threatened to kill the "ungrateful Spanish Queen" by using a crossbow. She didn't fear the threat and proved it with a lot of humour on 21 July 2009. From the official tribune in front of the military parade, the waved an apple over head as a reference to Guillaume Tell.

Death of the White Queen

Queen Fabiola passed away on 5 December 2014 in the castle of Stuyvenberg in Brussels. She was 86 years old. She had not made a public appearance since 31 July 2013 for the 20th anniversary of the death of King Baudouin...