Gambling is a game of all or nothing… and at Viage, the casino of Brussels, you’ll find yourself more often bankrupt than not. To remedy your losses, nothing is better than having a drink on the terrace at Kaméléon Sky. On the seventh floor of the casino, you can see an exhilarating view of the very center of the capital.

9. The Tower of the Hôtel de Ville

The tower of the Hôtel de Ville has not yet divulged all its secrets behind its vastly off-centered construction. But one thing is clear: the view from the top of the tower is worth seeing ! Since only a select group of people are allowed to go up, the city of Brussels provides a virtual visit.

8. The Sheraton, its stairs and its pool

Sometimes you’ve got to put in a little effort to see that beautiful view. Sign up for the Sheraton Brussels Stairclimbing Race, and after running up 466 steps (that’s 30 floors!), you will be able to enjoy the view, while getting a massage. The funds all go to charities.

The guests at the Sheraton are the only people who can use pool with the panoramic view. Nothing could be better than a nice morning swim: with each breath, you catch a glimpse of the Brussels skyline. 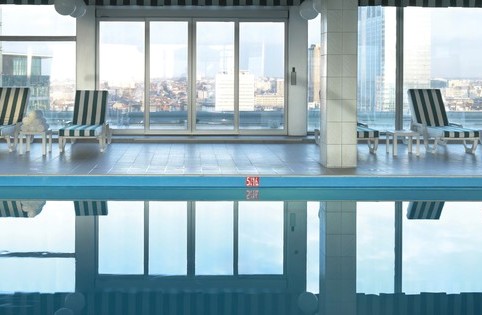 Get in the shoes of a busy junior executive and explore the hallways and the elevators of Brussels’ skyscrapers. At 150 meters, the Tour de Midi is one of the highest buildings. It’s kind of isolated from the clump of buildings that faces it towards the North. Give the Blue Tower or the ITT Tower a try on Avenue Louise. For a bit of nostalgia, head over to buildings S and D at the Université Libre de Bruxelles. Disclaimer: BrusselsLife takes no responsibility if the police forcibly remove you from these places.

UP-site, the highest lodging tower in the country, is welcoming its first inhabitants. For tourists and visitors, the only way to enjoy the panoramic plateform on top of this 140m high tower and its incredible view, is to be invited by an inhabitant. The panorama is, however, quite exceptional.

5. Promenade at the Palais de Justice

Those who are scared of heights will enjoy this view overlooking the Marolles. You can get easily get there from the Louise roundabout, but we prefer going a back way. From the Marolles neighborhood, take the elevator which slowly rises above the roofs all the way so you can see downtown as well as the Heysel plateau further out. Sunsets are amazing there. And you know, those are free.

The top of the Old England building, which houses the Musical Instruments Museum, was transformed into a restaurant. It’s open during the same hours as the museum but is only open for lunch. However, the night of July 21st is an exception- this day the restaurant is open until 7.00pm. This way you can have box-office seats for the fireworks that come after! We suggest you make a reservation as early as possible. Also, they offer brunch every Sunday from 10 am to 3:00 pm.

From the top of the dome of the national basilica, we all feel a little closer to God. Perched up at a height of 52 meters, the view is similar to that of the Atomium, even though it’s about 40 meters lower. Entry fee: 5€ Hours: 9 am to 5 pm (10 am to 4 pm in winter).

2. The Arches of the Cinquantenaire

Just to impress a colleague during your lunch break or to avoid having to go all the way to the Atomium, go to the Cinquantenaire. The three arches rising from the center of the park commemorate the 50th anniversary of Belgium’s independence. The view from one side is the European neighborhood, and from the other side the surrounding communities. You can see the view for free through the Museum of the Army (during their hours of operation.)

This is by far the best panoramic view of Brussels. You have to go a little outside the city to reach it, but from this location you have a 360 degree view of the city and not one isolated portion like in the city center. The elevator that takes you to the top of the Atomium was the fastest in the world when it was constructed and remains one of the fastest in all of Europe, at a speed of 5 meters per second. The highest sphere is equipped with informational panels and telescopes so you can see the view up close. Between the lawn in front of the Royal Palace, the wide center city streets and the aerial show from Zaventem, there’s always something to look at. When the weather is clear, you can see the top of the Antwerp Cathedral and the tower of the Ronquières Inclined Plane. The highest sphere also has a restaurant open for lunch and dinner. If you reserve a table you will not need to pay an entry fee. Entry fee: 8€, including the ticket to see the Atomium. It is also worth noting that there will soon be the highest residential building built in Belgium at 140 meters facing the Tour & taxi area. This project is being launched by Up-site and will include a restaurant at the top of the building. The platform next to the restaurant will be open to the public for free to see the view! Construction of the building is expected to be finished at the end of 2014.