Under Brussels, the Senne

Do not mix up the Senne and the Seine, that is the Brussels and the Parisian version. The smaller and shorter Senne is not as significant as the French one, but she has certainly marked Brussels with her presence.

The Senne’s source is about 40 kilometers from Brussels in the Soignies countryside, between two blue rock quarries. It flows towards us through Rebecq, Tubize, and Halle.

The Senne in Brussels

Although often ignored, Senne is the principal water source for the city. Today, the river dives into underground Brussels a little before the Gare du Midi, does a little tour around downtown via the little belt, and resurfaces at the Van Praet bridge. Until 1871, the Senne flowed through the city center. Behind Place Saint-Géry, in a discrete interior hall, a false stretch of the Senne reminds the curious passerby that the river once flowed right under our nose. So why did it disappear?

The history of the Senne in Brussels

Brussels was born on the banks of the Senne. The city built up along its twists and turns, fortified by its source. As time passed, workshops and mills gave way to breweries, tanneries, and other industries. The river crossed Brussels from one end to the other taking up quite a sinuous path close to what is now the central/northern part of the city. 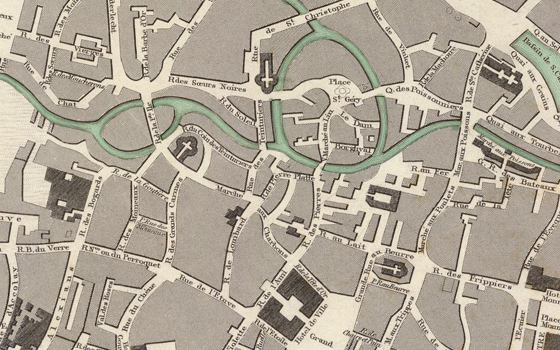 The Senne quickly became like an open air sewer that overflowed with even the shortest spurt of heavy rain. It was incapable of moving along dirty water full of detritus during dry periods. The once bucolic river became a polluted water source with an offensive odor. The second half of the 19th century proved to be fatal for the Senne. Too much flooding combined with a cholera epidemic were the main reasons for its demise. It was clear, this cursed river had to be removed. 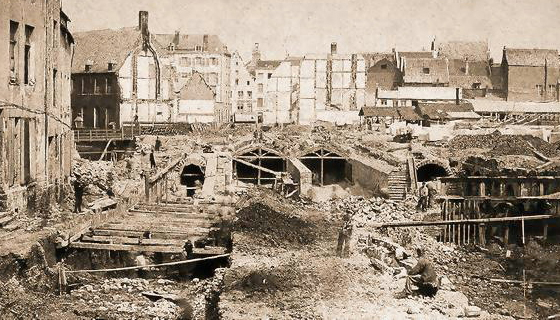 The mayor at the time, Jules Anspach, decided to vault the Senne. Four years of construction from 1867 to 1871 would relegate the river into two parallel collectors under the current boulevards in the center that would later become pedestrian streets. The construction was plagued with many technical difficulties, as well as an embezzlement scandal. The press at the time esteemed that Anspach was just digging a grave for Old Brussels…

In 1976, the pre-metro took the place of the Senne in the vault underneath the boulevards and continues to circulate there. Since 1955, the Senne has followed the little belt starting at the Gare du Midi all the way to the Place Sainctelete before continuing underground until the Van Praet bridge. There have even been some people to navigate through the underground river in June 2009! It was Vivaqua, a team passionate about industrial heritage. They’ve got this film as proof – something to check out right away!

The Senne and beer

To brew a lambic or a gueuze, you need a rather complicated alchemy, which only the most experienced brewers have mastered. One of the only secrets they are ready to reveal is the importance of the Senne and its spontaneous yeast. Without these yeasts, no fermentation. No fermentation, no lambic! Hence the name of one of the newest breweries in Brussels: Brasserie de la Senne.

The Senne flows towards Vilvorde and Zemst before emptying into the River Dyle in Heffen and expanding in the flow of the Scheldt River. Right now the river is biologically dead, but many waste water treatments in the capital should allow the Senne to come back to life soon.

The Senne is just like the city she inhabits, a true zinneke. It’s also the only river to cross the three regions of the country.