Since June 1980, many things about the Brussels 20 Kilometers have changed. The number of participants has multiplied by 10, the course has been altered, the start times have been pushed back… but none of this has thrown off the 58 loyal pillars that have been a part of the 20 Km since the very first year. Meet the members of this exclusive group of runners.

André, the most senior member

At the head of the pack is André Jassogne, the oldest of all these faithful participants. He reflects on the Brussels 20 Kilometers: At the start, nobody knows one another. Throughout the course you meet people, and sometimes friendships are created. Six years ago I met a young lady in the middle of the run. We promised each other that we would find each other at the finish line. We kept our promise, exchanged telephone numbers, and since then, we have stayed in contact and do not miss the chance to see each other at each edition, a sort of jogging party. Over the years, a number of his family members have pinned on a race number to run at his side. In 2014 at 86 years old, he will be at the starting line, this time accompanied by his daughter-in-law.

Raymond Rasquin, just a couple of months younger, did not stop with the 20 Kilometers. In 30 years, he has completed 101 marathons - the last one this past year in Cologne at the age of 85. Hats off to you, Mr. Rasquin! But when he is running on Boulevard du Souverain, Raymond is on home soil. My neighbors see me and never fail to encourage me. Well, that’s in 2014, since at the end of the 70’s being out in public for a run in short shorts was almost seen as an indecency offense. 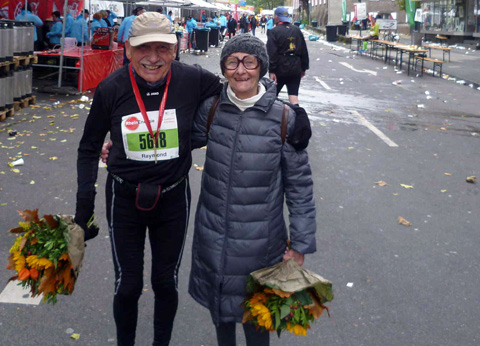 If André and Raymond were 51 years old at the time of their first race, Alain Bourdon was far from an adult when he first lined up at the start for the first edition of the Brussels 20 Kilometers. His first go was on June 8, 1980, along with 4658 other runners. The course naturally became an integral part of this passionate runner’s calendar, as he was always very sporty from a very young age. The 20 Km have become a tradition for him for the past 35 years… even if he had to make some sacrifices along the way. The year when my godchild was doing his communion, I went to mass at Saint Hubert in the morning before returning to Brussels to complete the 20 Kilometers and then heading to the province of Luxembourg to catch up with the festivities. His thirty-five participations are topped off with a personal best of 1 hour, 2.58 minutes in 1994. It’s a love story that sees no end: Even with crutches, I would make it to the end.

Eddy and his dad

The distinction of the youngest of these loyal participants goes to Eddy Feliers. He had barely blown out his 11 candles when he lined up with his dad for the first edition of the Brussels 20 Kilometers. On this day, he only had one thing in mind: Dad already exercised a lot, and I wanted to go faster than him. I wanted to beat him. I had to wait to be 17 years old, 6 years later, to cross the line before him! Since then, they haven’t stopped running together. 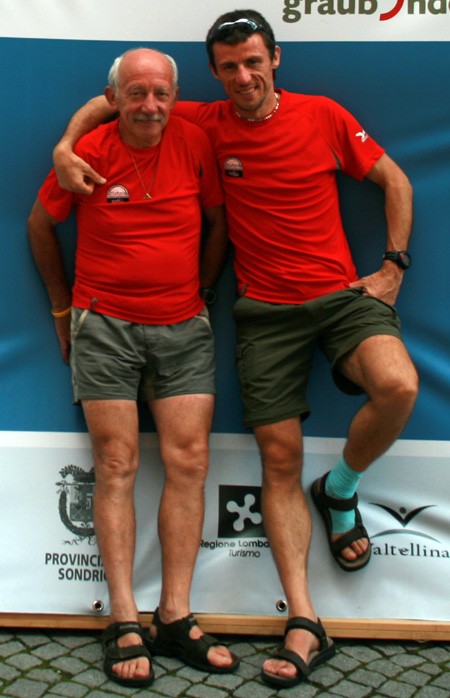 Guy, Hugo, and Marc, the expats

In June of 1980, Marc Badart was at the start of the first race dressed as a tennis player, shoes stained with the court’s burnt reddish color, shorts and a white polo with a Fred Perry emblem. Since then he gave in to the jogging style and stayed loyal to the 20 Kilometers. Although he has lived next to Lake Léman for the past 10 years, he wouldn’t miss his May round trip to Brussels for anything in the world. The chance to see my family and friends who have stayed in Belgium, to say hello to my 20 Kilometers family, and to participate in an event whose growth amazes me every year.

Coming from The Hague, Hugo Jonker admits from the get-go that the 20 km are his main motivation to keep training. But not the only reason he makes the trip to Brussels every edition. I lived in Brussels from 1958 to 1973. My sister, Yvette, still lives in La Hulpe. I stay at her home the course weekend. I get to see my sister and my niece, Julie, who go every year to pick up my race number. Hugo had some emotional moments during the 20 Kilometers. I ran it many times with family members: my adorable wife Ineke, my marathon running mother Hélène, and my sister Jelka. My brother, Michiel, Hawaii Ironman finisher, has accompanied me probably more than 12 times.

Some more moments that we can all relate to: In 1992, I was half way between The Hague and Brussels when I realized that my running shoes were still in my apartment! I had to go back to get them and arrived in Brussels about 20 minutes before the start. Just in time…

In the microcosm of Brussels jogging, Guy Demol needs no introduction. As a happy retired man, he decided to head south to continue to train in the sun. His one condition: making the trip back in May to be at the start of the 20 Kilometers. 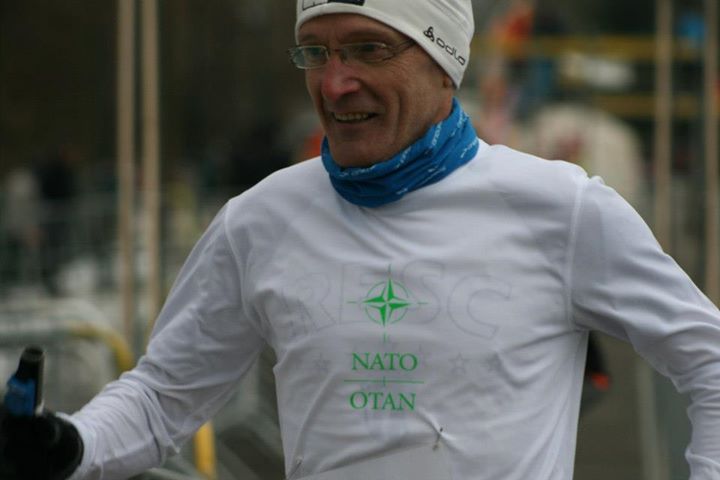 All the stories conclude with the same message - a message of sports, friendship, and fraternity that has been passed on to the organizers of the event, Emile and Carine. They too are organizing the 20 Kilometer race for 35th time.