A day in the life of a Brussels city sweeper

Written by Frédéric Solvel - 24 Jul 2014, 00:00 (Updated: 12 Jan 2022, 04:32)
Their suits are orange and green, and they do the streets of Brussels a whole lot of good. Two hundred and forty of them every day of the year, but we hardly notice… and yet we cringe at the thought of our city streets without them! Here is a day in the life of a street sweeper.

When we arrived on site at the public cleanliness service near place Saint-Catherine, Olivier Doborouviez was already at work. With care, he was tending to and preparing his material for the day. There was a third worker in the room, named Glutton, who is responsible for revolutionizing the work of Olivier and his colleagues. With the vacuum, we can pick up just about anything. Cigarette butts stuck between two cobblestones are difficult to get out with a brush. For Glutton, it’s a piece of cake.

We got the up hand in the scheduling that day: not only do we have the machine to help us, but we were assigned the wide sidewalks along the boulevards in the center. Our sector stretched along boulevard Anspach between place de Brouckère and place de Fontainas.

As we walked the couple hundred meters in the general Bourse area, Olivier expressed his passion for his job, a passion soaked in realism. There will always be less of us than the people who make it dirtier. Everyone, even involuntarily, is an enemy. City sweepers are out every day of the year. They take care of their respective sectors from 6:30 am to 8 pm. In 2013, they picked up 4,281 tons of waste! 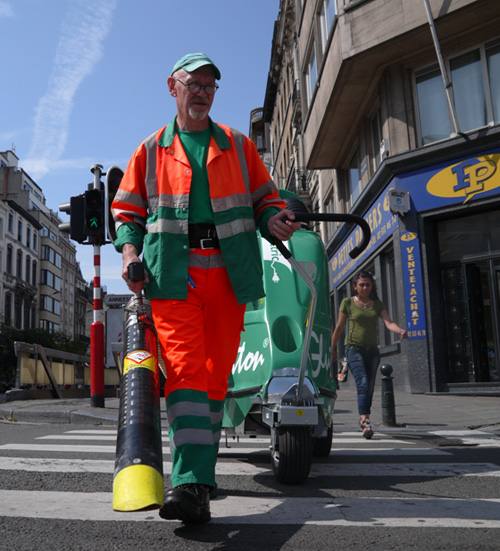 It had been warm those past couple of days, and the trees along the boulevards were feeling it, letting a couple of dry leaves fall to the ground. Glutton gobbled them up in a second. In Olivier’s opinion, there is no good or bad season. The rain makes everything wet, we are subjected to the cold, and we suffer in the heat. But the worst is when there’s a mix of rain and sun throughout the day.

Next to the dead leaves, Glutton suctions up all sorts of waste: wrappers, cigarettes, organic waste… Today, it’s not that bad, there’s not too much trash. And a team already came by this morning. You should see the weekend, it’s like there was a war. Blood, empty bottles, etc. Not to mention the state of the streets at the Saint V or during Saint Nicolas for the students.

In addition to cleaning the streets, Olivier and his colleagues are often approached by people. When they aren’t giving directions to tourists, they are listening to the locals. Olivier timidly shares his couple month experience living in the street which makes him especially sensitive to homeless people. Sensitive but lucid. When I find a packet of cigarettes, I’ll keep it for a homeless person, but alcohol or money is out of the question. Things lighten up when he strikes up a conversation with Jef, the escargot vender.

“Serving a country that isn’t mine”

When we ask him about what he is most proud about in his job, Olivier stops Glutton and doesn’t hesitate. My title is a great honor. Serving a country, even if it isn’t my own, is a great honor. (Olivier is French.)

We had just started up again before we were stopped in our tracks. An interesting scene was unraveling before us: a man, visibly deranged, dove his hand into a trash can, pulled out a wrapper, and kept walking… and throwing the trash on the ground a couple of meters away. Our street sweeper gave a reflective response: In ten years, there’s not much I haven’t seen, and still there are things to come.

At the end of his day, Olivier met back up with his colleagues with satisfaction of a day’s work behind them. Tomorrow, they will start over again. Hats off to you and thank you!