Even if the track at the Games in London 2012 took on a bluish tint instead of the traditional red, some things never change regarding this sport - it’s all about running, jumping, and throwing.

In Belgium, as with the 212 other member countries of the International Association of Athletics Federations (IAAF), we run, we jump and we throw for fun and performance. Let’s lace up our spikes and follow the tracks of athletics in Brussels!

Your children want to be just like the stars of athletics? They dream of being applauded by the crowd at the Olympics in about 15 years? You consider athletics the king of sports?

Brussels has about ten clubs: 8 French speaking and 2 Dutch speaking. Before you hand over your offspring to them, you must first think practically. To avoid having to go across the whole city for each practice, take a look at the map and address book of Brussels Athletics which contains all the clubs in the capital.

Excelsior, member of the Stade Roi Baudouin, and the White Star (found at the Stade Fallon) are the most prestigious. They are reliable and are very attentive to the young athletes. For training, don’t forget the Cercle Athlétique in Schaerbeek and the RIAAC in Auderghem. Above all the clubs is Brussels Athletics, called BA for the regulars. Their goal is to promote and develop athletics throughout the Brussels region. They’ve got a full agenda!

To start, no need for anything particular: just a pair of running shoes, shorts and a t-shirt. Are things getting a little more serious? You will need spikes, light weight shoes with grips on the bottom. The sports store Décathlon offers a basic range of gear and at Jogging + you can get some quality advice. 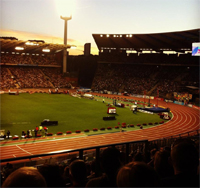 Weekends are packed with competitions, meetings and other championships before the peak of the season in the beginning of September with the Mémorial. The Mémorial Van Damme is the competition to see! The elite athletes of the world confront each other at the Stage Roi Baudouin for this intense occasion. The national and regional bests will all meet at the Grand Prix Mingels (beginning of May) and at the Grand Prix de Brussels (beginning of July). Those who like to complete all 10 events of the decathlon will find themselves at the end of September in a family-friendly and sporty atmosphere.

Kevin and Jonathan Borlée from Woluwe rub shoulders with the world elite in the 400m and are the driving forces of the 4x400 meter relay that excites the country at each and every international competition. The Borlée family is a clan as well as a team. Their clan includes Olivia and Dylan. Olivia is the older sister who, after having won a silver medal for the women’s 4x100m relay in Beijing, has unfortunately been suffering from injuries. Dylan, the younger brother, is coming up close behind the twins and should not take too long to shine on the track… The Borlée’s, a team. In this family, you’ve lasi got the father, Jacques. Jacques Borlée started a training group, originally just for his twins, which notably attracted the hurdler Damien Broothaerts.

There is life outside the Borlée clan- Anne Zagré would agree. This star sprinter born in 1990 has an impressive and promising ranking record. Semifinalist in the London Games, she decided to take advantage of the quality athletic facilities at Florida State University for the first semester in 2013. 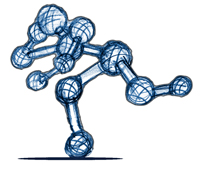 Native of Brussels and a product of the Royal Excelsior Sports Club (RESC), Frédéric Xhonneux kicked off a new wave of Belgian decathlons and continues to excel in the 10 track events. Behind him Daan Elsen is doing some beautiful things in the same discipline. Another hopeful is Pierre-Antoine Balhan from the Ardennes who shines on the 800 meter race.

Some 4x400m relay athletes also come from Brussels, whether they were born in the capital or moved here. Amongst these are Arnaud Destatte, Antoine Gillet, Arnaud Ghislain and Arnaud Froidmont.

The proof is here, Brussels is a source of great athletic talent. However, our capital is painfully lacking a room for indoor training in winter in order to encourage the development of new talent. Even if runners do not have difficulty training when the temperature drops, it is a completely different thing for sprinters, jumpers and throwers. We admit that the gloomy hallway of the Adeps center in Auderghem and the Erasme room are not the most engaging areas to train.