After long debate, it was decided to go from the Montgomery roundabout to Place Poelaert at rush hour. On the starting line: one cyclist, one car driver, and 2 public transportation gurus.

Have you ever wondered what the best transportation option in Brussels is? We did the work. Car, bike, metro, and Villo (city bike). On your marks…

After some customary politeness, everyone gets going. See you in the center!

Olivia, metro & Villo: Caroline and I hurry down into the Montgomery metro station. After walking (at a good pace) through the never-ending hallways, we pass through the gates and go down onto the packed platform. We're having a good day – our metro arrives at the same time.

Robin, car: After a ride around the roundabout, I take the tunnels towards the center. Traffic is bad. The race is off to a bad start for me.

Frederic, bike: I am already streaking past the Cinquantenaire gates. Between Montomery and Merode I have already been confronted by the daily cyclist traffic in Brussels. In my near future: a truck parked in the bike lane and two cars whose blinkers don’t seem to be working.

Olivia and Caroline: At Arts-Loi our routes separate. Caroline opts for a 100% underground strategy and jumps on the platform to catch a metro towards Louise. For me, I’ve got one more station before leaving the metro to find a Villo.

Fret: After having some bad luck with the traffic lights at Schuman, I catch up with the pack of bikers on Rue de la Loi. The light is red again. Once it’s green, the downhill ride to the Rue Royale will be all mine. 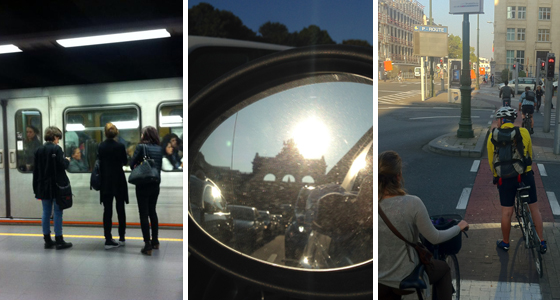 9:07 Justice will be served

Robin: In addition to these 7 lights, the Rue de la Loi is full of traps. This morning there is a double parked car that is slowing me down. I’m keeping an eye out for the bike lane and no signs of our cyclist.

Fret: Life is good in the bike lane. I’m done. After riding along the Parc Royal, here I am on the cobblestones of the Place des Palais. The cupola of the Palais de Justice is towering in the horizon.

Olivia: Parc has no need to be jealous of Montgomery. Two long hallways and three escalators later, I reach fresh air of the Brussels morning again. I hop on a Villo and get going.

Caroline: Line 6 of the metro is a little less packed. After a couple of stations, it stops at Louise and my underground commute is done.

Fret: Coming up on the Place Poelaert, I whistle some Jean-Louis Aubert : Voila, c’est fini. At the foot of the BrusselsLife.be banner, I switch to some Queen: We are the Champions! Victory and a yellow jersey to go with it! 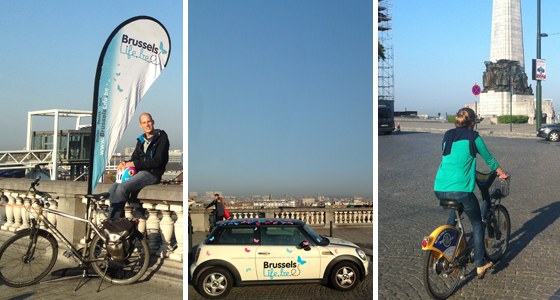 Robin: The little belt highway is looking much better! Traffic is moving so I can speed towards the Palais de Justice.

Caroline: After two metros, my trip ends on foot. Before I can see the cupola, I am held up by the crowd of commuters who, like me, want to get out of the station fast. After crossing over the Louise roundabout, always kind of iffy, I can comfortably reach the finish line. It is 9:15 am, and I am the second to arrive.

Robin: I’m there. I’ve just got to allow a couple of lawyers in togas to cross the street before I can find a place to park. Bronze medal for my Mini and her butterflies.

Olivia: From the Sablon, the route is uphill to the Palais de Justice. The change in elevation and the cobblestones along the way are not helping my progress.

Olivia: Place Poelaert, here I am! After dropping off my Villo at the station, I join the panorama. Last but not least. 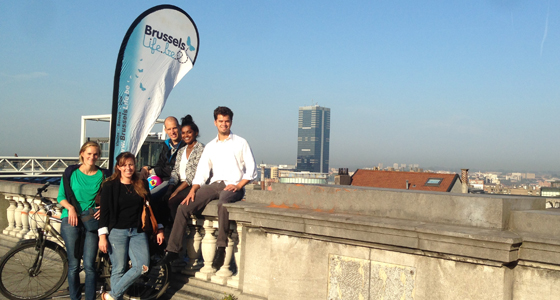