Written by Frédéric Solvel - 07 Jun 2021, 00:00 (Updated: 12 Jan 2022, 04:33)
Whether in Zinneke-Pis, Zinneke Parade or other diverse expressions, the zinneke is nowadays used in various contexts. But let's go back to the origins of the most famous Brussels saying.

While it has been kept astray from the center, the Senne once used to flow in many areas of the heart of the city. Its two arms and many meanders literally cut Brussels in several parts. Next to the natural river existed an artificial arm: la Petite Senne (the Little Senne). Created during the 16th Century in the old ditches of the second outer wall of the city, this alternative path was used as a bypass of its older sister: the Senne.

Let's go back to school for a minute. The first lessson is childish: Senne in Flemish is Zenne. 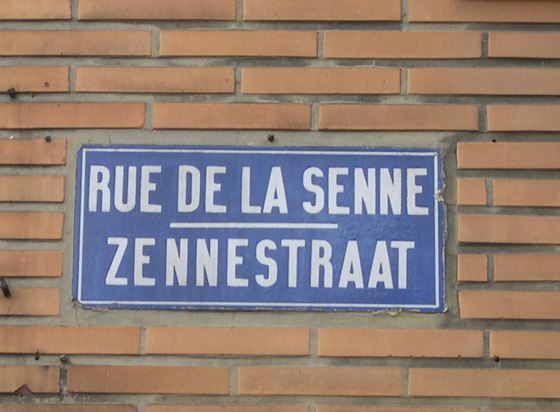 The second lesson is a bit trickier. As a reminder, the diminutive is a lexical method to add to a word an idea of smallness or fragility. Its use is relatively limited in English. A few examples would be Suzie as short for Suzanne or reddish for red, etc. But in Flemish (Dutch), its use is a lot more generalised. The Brabant and Flemish dialects, from which derive the Brusseleir (tongue of Brussels) often add the suffix –ke.

So in the tongue of Vondel, the Little Senne is said Zenneke. Let time and use take over and you get: zinneke.

… and a lesson of natural sciences

Perhaps nowadays, most cats and dogs live within the boundaries of their masters' house or apartment, there was a time when these animals would wander among the streets, non stop breeding with one another. To get rid of them in the 19th Century, the Brusseleirs (people from Brussels) didn't hesitate to drown them in the Little Senne, the Zinneke. And so it is that the victim rapidly took the name of its death tool. And so the bastards became zinnekes.

From furry animals to those with feathers, it's a just a wing away with the famous kiekefretters, but that's another story...

Nowadays, the zinneke expression refers to the inhabitants of Brussels that are not originally from there, and by extension, the cosmopolitan and multicultural aspect that makes Brussels so special and proud.

The Zinneke-Pis was made to last between the rue des Chartreux et the Vieux Marché aux Grains, while he intends to pee on public property...

The Zinneke Parade invades the center of Brussels every two years for a magnifiscent parade. Also, every dog, whether bastard or not, can now take part in a beauty contest and perhasp be elected as the prettiest zinneke.