After a week of hard work, the chocolate maker Bram Hullebroeck has presented his sweet masterpiece : a one-meter high model of the Brussels Town Hall. You can admire this chocolate building at Chocopolis until mid-April 2013 before it will be moved to another chocolate maker in the neighbourhood.

This replica is exactly like its stone-and-glass alter ego : the guilded statue of St. Michael slaying the devil, the doorway leading to the inside courtyard ... as well as its famous asymmetrical wings. Just a reminder: no, the architect did not commit suicide throwing himself from the top of the gothic tower when he realised this asymmetry. This difference between the two wings is simply the result of the building process. The construction took place in three phases : the right wing was the last addition to the initial plan and the rue de la tête d'Or restricted de facto its length ! 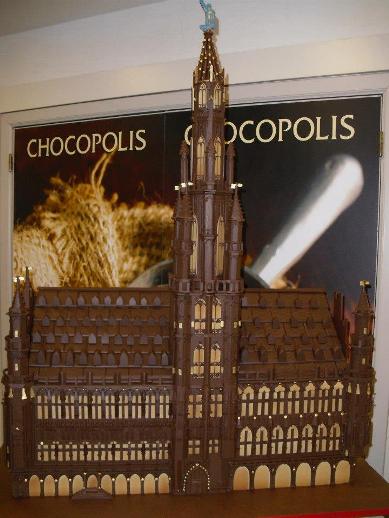