The South African ambassador (Rue Montoyer, 17-19 in Brussels, 1000) opened a register of condolences so that anyone can leave a message in memory of Nelson Mandela. The register is accessible every day of the week from 9 am to 4:30 pm until the former South African leader's funeral. Flowers and other tributes are also welcome.

On October 7th, 1993, Mandela, a recent Nobel Peace Prize winner, visited Brussels. He came to appeal to the European Community for economic support. During his time in the capital, he met, among others, Jean-Luc Dehaene (Prime Minister) and Willy Claes (Minister of Foreign Affaires).

On May 1st, 1994, Johnny Clegg was in concert on place Rouppe for the Labor Day celebration organized by the FGTB (General Federation of Belgian Labor). At the same time, Nelson Mandela was elected President of South Africa. Emmanuel Nudel was present at the concert and remembers this via his Facebook status: “During the concert, a man went up to Clegg and spoke to him in his ear… Clegg stopped his singing and shared the important news with everyone - the results of the South African elections. Nelson Mandela was elected President! He started busting out Asimbonanga. It still gives me chill bumps today…”

The Free University of Brussels named one of their 10 resident buildings after Mandela. After much needed renovation, it was reopened last September and now houses 240 students on the avenue des Courses.

In Manneken Pis’ closet, the Nelson Mandela costume is number 730. It was given on April 27th, 2004 to mark the 10th anniversary of the end of apartheid. Manneken Pis wears this costume every year! Note the wig that perfects the look. 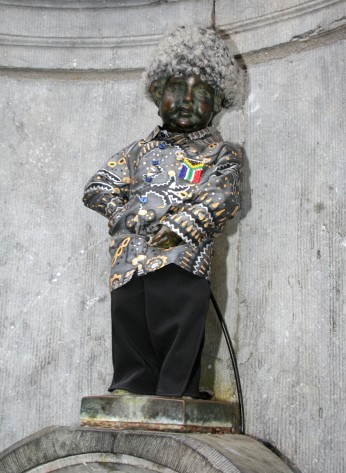