Written by Olivia Regout - 02 Feb 2014, 00:00 (Updated: 12 Jan 2022, 04:29)
We are used to seeing him completely naked. But 130 days a year, this little Manneken hides his bum under folkloric and rather picturesque costumes. In his closet includes a costume for Nelson Mandela, Dracula, Elvis, a cyclist from the Tour de France, an astronaut... And the latest costume to join the collection: a "Gille" (a folkloric costume that men from the city of Binche wear during the Carnival festival). BrusselsLife.be attended the festivities, from the fitting session all the way to when the curtain was raised.

Our little bronze statue weighs 17 kg and measures 55.5 cm tall. His closet has accumulated no less than 915 hand made costumes. The very first of the collection was given by Louis XV in 1747. Since then, the "Petit Julien" has not stopped acquiring new outifts. He receives 15 new costumes each year. Something to strut for all the tourist pictures he has to endure all day long, everyday. 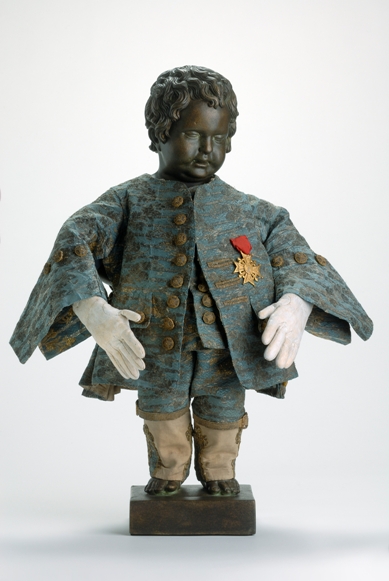 Drum roll please, this is a serious moment. This year, the Carnival of Binche is celebrating their 10 year anniversary of UNESCO recognition. For this occasion, our national hero will receive his 916th costume: the traditional costume of a Gille (local Binche men dressed up in folkloric attire) given by the city of Binche and the International Carnival and Mask Museum. 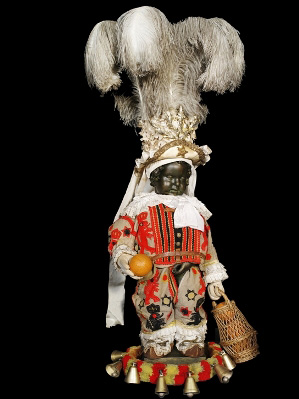 This is not the first time that Manneken Pis pulled on his clogs, his ruffled collar and his feather hat. “The Binche Union for the Extension of Commerce gave him a costume on January 7, 1929,” explains Olivier Desart, museographer at the Mask Museum. “But the costume is now too old for Manneken to wear.” Today, the old outfit is displayed at the temporary exhibition “Le Gille sens dessus dessous” (Gille Upside Down) at the Mask Museum and will join the archives afterwards.

From the fitting until the curtain rises

1. The making of the costume 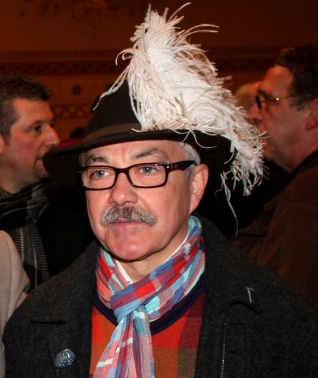 A new costume was thus fabricated so that our little national man could proudly represent Binche heritage. Karl Kersten, an artisan fashion designer from Binche, began making the little outfit. “He based his measurements on the old model,” says Olivier Desart. Manneken Pis’ costume is also a family story, since the great grandfather of Karl Kersten made the first costume 85 years ago.

Making an outfit for the “Little Julien” requires dexterity and ingenuity. The challenge is figuring out how to get around Manneken Pis’ arm which is holding on to his little winkle. So he usually gets a third arm for this occasion.

“This outfit was made with the same materials as the traditional costume, using all the right proportions of course: feathers, a ribbon ruff, a lion pattern, clogs, a traditional padded belt with bells hanging…”. Basically, a perfect miniature Gille.

Once the costume is finished and one week before it is officially placed on Manneken Pis by the city of Brussels, it is sent to the capital for a fitting. In the cultural services office, an exact replica of the statue is used to try out the blouse, pants, belt and head wear. Now everything is ready for the grand festivities on February 1st.

3. Presentation of the costume

The big day is finally here. On a rainy Saturday morning, 300 Binche natives met in the capital to celebrate the event. The center of Brussels kind of looked like Mardi Gras. A huge circle of people holding hands formed on the Grand Place. 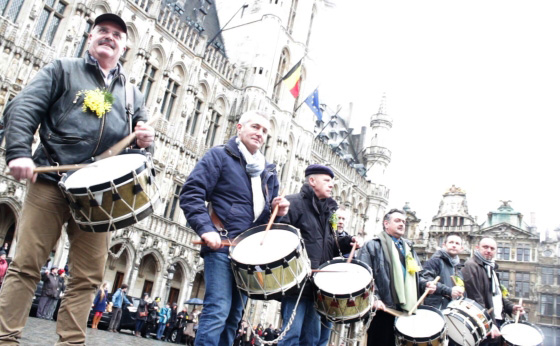 The costume was received at Hotel de Ville by the municipal authorities and the members of the Manneken Pis Order. Then it was officially given to the people of Brussels. This “Ketje” (little guy in Flemish) got a 916th outfit choice. 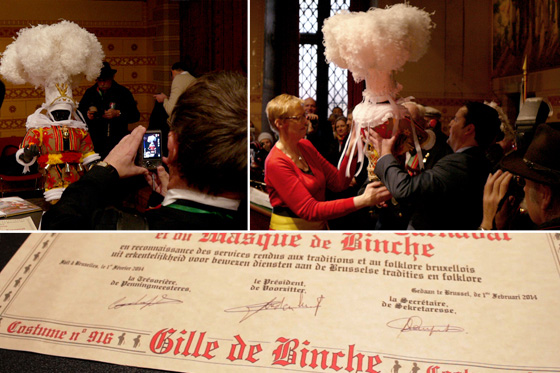 The speeches had hardly finished before the official dresser of Manneken Pis came to the forefront. With the costume in arms, he headed straight for the fountain where the naked Ketje waited to be clothed. It had to be done quickly, since the cortege would soon be arriving. Under the curious eye of passing tourists, the official set up his ladder, climbed up to the same level as the little man and started the process. Karl Kersten was there for help. First, the base of the hat, then the pants, the stuffing, the blouse… To finish it all off, a couple of oranges in the basket. What about the hat? That would stay in the box as long as the rain kept falling. All that was left was to draw the curtain and wait…

While we waited for the drummers leading the cortege, not a drop or rain fell from the sky. The dresser added the finishing touch… 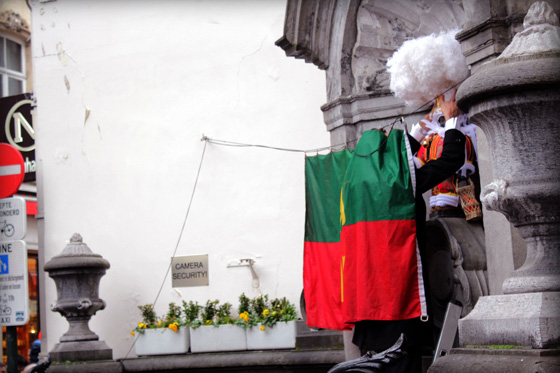 5. Cortege and raising the curtain

The energy in front of the fountain was mounting as the noise from the Grand Place festivities got closer. Drummers and viola players led the cortege to the foot of Manneken Pis, who was still hidden behind the curtain. The moment we had all been waiting for has arrived - the curtain opened. Our favorite national man appeared in his brand new Gille from Binche costume. 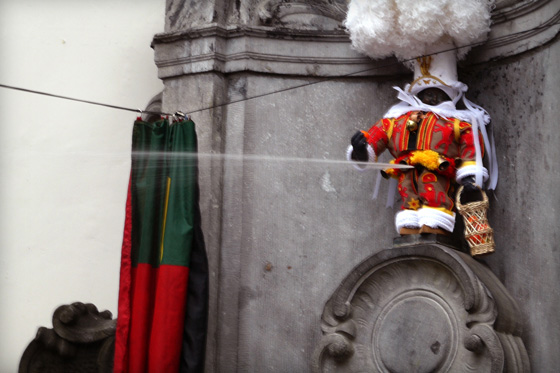 Those who would still like to admire his traditional Gille costume, Manneken-Pis will proudly sport his feathers for Mardi Gras (March 4, 2014). While you wait, you can go to the House of Folklore and Traditions where the outfit will be displayed for the exhibition the Carnaval de Binche, 10 ans de reconnaissance par l'Unesco (“Binche Carnival, 10 years of UNESCO recognition”).