Written by Frédéric Solvel - 14 Dec 2014, 00:00 (Updated: 12 Jan 2022, 04:34)
Part taxi, part bus, Mobiloo is the missing link in Brussels’ transportation. They are designed after the Asian tuk-tuks and transport you between the Bourse and Louise or between Porte de Namur and Flagey.

The Mobiloo is a three-wheeled vehicle that runs exclusively on electric energy, considered a category B moped. The most worldly of our readers might take this definition and immediately think of the tuk-tuks that are all over Asia. The sound of the motor is another hint, since we have here a model fed by the miracle of electricity.

The Mobiloo network is set up so that there are six stations spread out in two zones: Midi train station, De Brouckère, Porte de Namur, Louise, Flagey, and Bailli. Louise and Porte de Namur will be the connection between zones A and B. The trip comes out to 4 euros for one person in one zone and 5 euros for two people. For horse drawn transport between the two zones, the cost doubles. 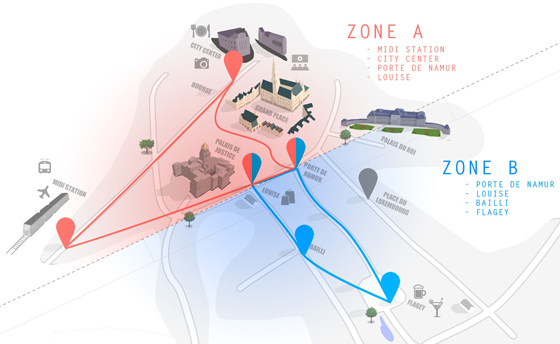 During the ride, the passengers get a lot of perks: wifi connection, newspapers and magazines, cell phone chargers… Behind the wheel are young, multilingual people of Brussels, safe drivers and very fond of their city.

While we wait for the new taxi plan for the Brussels Region that will regulate pricing, Mobiloo should, in contrast to Uber, benefit from the authorities stepping in. We will see if it will work in Brussels…