Let’s start with a vocabulary lesson. Oars are the paddles used to advance the shell, or racing boat, in the water. Depending on the number of rowers and oars, the name of the boat changes: from the skiff to the coxed eight with a coxswain, to the quad scull and many other combinations.

The races are usually 2,000 meters long. The sport is active all year around, and you can spot rowers on the canal any weekend of the year.

The 14 kilometers of canal across Brussels and its extensions are a perfect for rowers. So it makes sense that there are several Brussels clubs along the canal and in the city. The Royal Sport Nautique, the Union Nautique, and the Sport Nautique Universitaire are all three located at the Van Prat bridge, while the Cercle des Régates in Brussels was established in Anderlecht.

ULB and VUB do not have a rivalry (yet) like Oxford and Cambridge do on the River Thames, but Brussels does have a big rowing competition: the Grand Handicap d’Hiver. According to the average age and the composition of the team as well as the type of boat, each team receives a handicap and a starting time that corresponds. The slowest start first from the Van Praet bridge, hoping not to be caught before the finish line 5 kilometers later under the Vilvorde bridge.

One winter Sunday morning, we had a meeting at the club house of the Royal Sport Nautique, a building with an old-fashioned charm from the beginning of last century. A quick briefing and a coffee before beginning the serious stuff.

The adventure started on the ground floor at the ergometer in order to learn the rowing movement. Balancing strength and fitness, it seemed especially important to use the maximum amount of muscles. Arms and legs are strained and must stay in sync. After some practice, I got the hang of it and received the green light to board the boat…

Time to go to the pontoon, which was on the other side of the path. It wasn't so easy to cross with 3 meter long oars under your arms. 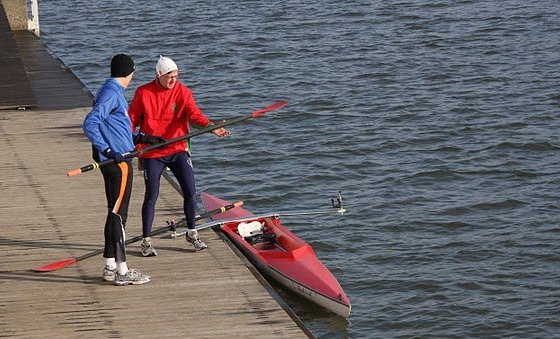 The water in the canal does not make you want to go for a swim, and boarding was not all that easy. This didn’t hold me back; my behind was on the sliding seat, my feet planted on a bar, and my hands timidly held two oars. The theory and technique of the morning already seemed long ago…

From the bank, my buddy showered me with advice. My movements were hesitant, that’s for sure, but the boat started to slide through the water. And to complicate things, the boat advances in the direction to which you have your back. My rowing went along, but the fluidity you see with experienced rowers wass not there.

Getting back to the pontoon was not easier than boarding. But it was a good experience nonetheless.