The idea? Often on countryside paths, a team of 2 set off together for about 20 kilometers alternating between running and biking. The runner becomes the cyclist and the cyclist becomes the runner. How often you switch is up to you, but the distance between the teammates can never exceed 10 meters.

Who does this? Very few people are specialists of Run & Bike. However, athletes from other disciplines often give it a shot in the off season. Most of the participants are triathletes looking for a winter alternative, but we can also find people from a variety of other sports on the starting line. It doesn’t really matter each teammate’s level because when it’s your turn to run, you go at your own pace. Any combination is possible: husband and wife, dad and son, niece and aunt…

Technique? Even if the best run and bikers stand out for their effortless switches where the bike doesn’t stop, it’s not necessary to master this skill to do run and bike. If you would like to try, take a glance at this video:

It’s not complicated. A mountain bike, a pair of running shoes- that’s it! Ideally the teammates would wear the same t-shirt. Always bring equipment to fix an eventual flat tire.

A little known discipline and not many events… not many but all are quality! The season in Brussels generally begins on November 11th with the Gants de Toilettes. This is a course in the Forêt de Soignes; the social outing afterwards makes this course worth the trouble, perhaps more than the course itself.

After the holidays, the Triathlon de l’Otan takes up the reins with the competition Run & Bike de l’OTAN which marks the start of the new year of sports. Even if some participants are feeling a little heavy after the holidays, this doesn’t hinder the club from organizing the most competitive race of the season after the New Year! 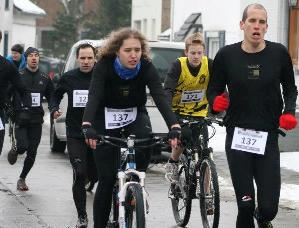 End of February: fans of the sport are urged to try out the Brussels Royal Sport Nautique alongside the canal and in the thickets of the Val du Bois des Béguines during the Run & Bike des Rameurs. This is definitely the most difficult course, especially if the ground is wet!

Alongside these traditional challenges, there is the Eco Trail de Bruxelles which consists of a 3 person run and bike (with 2 bicycles) for 80 kilometers around the green spaces of the capital primarily along the designated walking paths!

In the suburbs, Crainhem, Braine l’Alleud, Nossegem and Sterrebeek offer many beautiful courses in autumn. And finally, the ASBL Promorunbike organizes a challenge from October to March and awards the Champion de Belgique title.