Who are you Saint Michael ?

Saint Michael fought Lucifer during the rebellion of the fallen angels and cast him out of the Heavens. In the Old Testamen, Saint Michael also led Noah's family and held back Abraham's arm from sacrificing his son.

He is the Angel of the Apocalypse, as well as the Angel of Martyr. He consoled Jesus during his agony and collected his blood while he was crucified, before bringing it to God as an absolution for mankind's sins.

In Belgium and more particularly in Brussels, Saint Michael is often portrayed as slaying the dragon that represents Satan and not just any demon.

At the very top of City Hall on Grand Place, the copper statue of Saint Michael has at his feet a shapeless and anthropomorphic creature with a diabolical expression and scales, which represents the Devil himself.

Around the year 1000, many monuments and chapels were built on high grounds across Europe to remind us that Saint Michael was the first defendor of the Light against Evil. 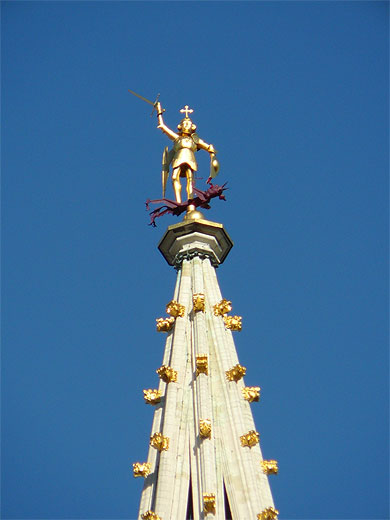 According to legend, Lambert II, count of Louvain and governor of Brussels (1041 – 1063) was sentenced to death by his father Henri the First to have kidnapped his fiancé. To avoid the sentence, Lambert called upon Saint Michael, who agreed to give him a providential escape. The Count had him then declared Saint Patron of Brussels.

In 1047, he decided to build on the Treurenberg hill a church dedicated to Archangel Saint Michael. It was on this same hill that later would be built the the magnifiscent Cathedral Saints-Michel-et Gudule.