It is October 24, 1356. The war of the Brabant succession is in full swing. Everard t’Serclaes scales a  Brussels city gate and, with the help of Brussels patriots, pushes the Flemish troops out of the city. Holding the same title as Montgomery, he could also be named a liberator of Brussels.

Having deep lineage in Brussels, he was the deputy burgomaster of the city five times. His statute put him in the position to defend his threatened city. This is why in March of 1388 Sweder d’Adcoude, Lord of Gaesbeek, sent his men to attack t’Serclaes. It was an attack that would cost him his tongue and his life a couple of days later… Everard breathed his last breath on the Grand Place in the Maison de l’Etoile.

During the reconstruction of the Maison de l’Etoile in 1897, a monument in memory of Everard t’Serclaes was erected. The municipality authorities headed by Charles Buls appointed Julien Dillens to make the sculpture that was inaugurated in 1902. 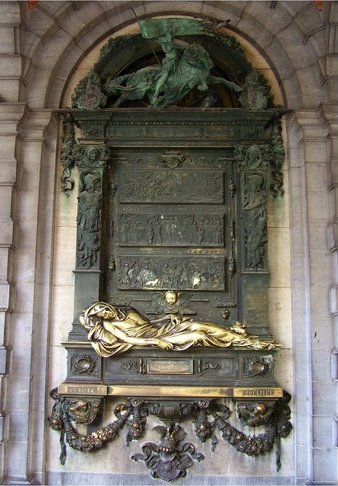 Everard t’Serclaes lies dying in the foreground. The background is made up of three bas-reliefs on top of each other, successively representing the liberation of Brussels, the joyous entry of Jeanne and Wenceslas that followed, and the Brussels people’s destruction of the Gaesbeek castle to avenge the attack on t’Serclaes.

Today, Brussels natives and tourists passing by the corner of the Grand Place and the rue Charles Buls don’t miss a chance to touch t’Serclaes. It is customary to make a wish as you touch him too, the most honorable of which is “to hope to come back to Brussels.“

Popular belief took to the arm of the statue during World War I. Tormented by the occupation, the people of Brussels put their trust in t’Sercales by touching his hand. This action evolved over time to be a caress from his head to his feet. Superstitions quickly developed.

It is particularly recommended to touch his right hand for good luck. If you prefer a year of happiness, run your left hand from his forehead all the way to the head of the dog at his feet. And for your wish to come true, you should find the three mice hidden in the garland…

Provided that you trust a copy to make your wishes come true! Today, the statue is a replica to please the superstitious while the background is protected by a didactic board waiting to be removed in the coming months. 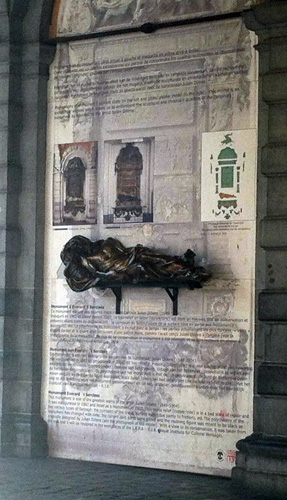 Since October 2011, Dillens’ original sculpture was removed for restoration. The current copy made of resin has been vandalized several times and withstands many touches everyday. After restoration, the bas-reliefs will be visible once again. A metal sculpture will replace the current resin one. The original t’Serclaes will be displayed in a museum where people will not be able to touch him.