Written by Olivia Davis - 19 Sep 2013, 00:00 (Updated: 12 Jan 2022, 04:27)
The waffles! The fries! Who’s this cute Tintin everywhere?! The Grand Place! The fries! For Americans, the joys are many when they first arrive in Brussels. But to be honest, there’s always a point when you hit the downward slope of the culture shock U-curve. This is when not even the most delicious beer can ease your homesickness. Ok, it'll help some. But if you’re still missing the familiarity of the States or would just like to discover American things in Brussels, here is your guide.

When easing homesickness, the first thing that comes to mind is food. Rest assured, woven through the international cuisine in Brussels is indeed a hint of the U.S. If you need a taste of home, b-line it to Le Balmoral. This restaurant in the Ixelles district serves American classics in a typical (yet exaggerated) diner atmosphere. Buffalo wings, club sandwiches, hot dogs, brownies, cheesecake, and even pancakes are served! No need for a translator.

Otherwise, bagels are quite the fad in Brussels right now. They may not be exactly as you remember them on the streets of New York, but there are definitely a wide range of flavors, spreads, and sweet and savory combinations. You can get a bagel at Café de la Presse, Little Miss Bagel, Au Pays des Merveilles, Rachel, Choupy’s, Charlotte ses tartines, and tons of other cafes and restaurants all around the capital.

If you are really desperate, get a pick-me-up at Starbucks. You will have to go inside the Starbucks - Gare Centrale or Starbucks - Gare du Nord to get that caramel macchiato or American cookie calling your name.

Fact: where there are tourists there is a Hard Rock Café. Like Tokyo and Paris, New York and Istanbul, Brussels has one of its own, located at one of the most recognizable sites in Brussels: the Grand Place. The first Hard Rock Café was indeed in London, but this is an American restaurant chain, serving burgers, fries, steaks, sandwiches, salads etc…  If you are looking for a lively, upbeat American vibe, the Hard Rock is your place.

And as you pass by the De Brouckère metro after your meal at the Hard Rock, say hello to the massive billboard for that Atlanta based giant... 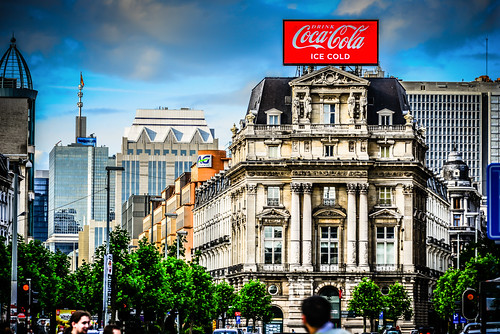 The Brussels American School functions exactly like the U.S. system in terms of grade levels (from kindergarten all the way to 12th grade) and is primarily for U.S. military and NATO families living in Brussels. There are a number of American university campuses as well, notably Boston University and American University's Brussels Center.

And now for a bit of history that the Université Libre de Bruxelles (ULB) shares with the United States. During WWI, future President Herbert Hoover started up the Commission for Relief in Belgium (CRB) which helped ship foodstuffs to a starving Belgium. After the war, the CRB then donated to the construction of Bâtiment A on the campus of ULB to help build the city back up after the war’s destruction. 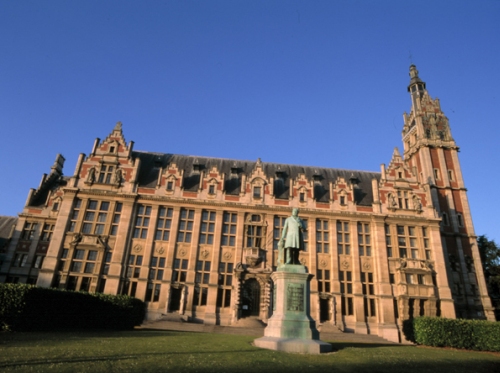 The capital of Europe is fittingly a part of the World Trade Center global network. Next to Gare de Nord (northern train station) in Brussels' business district two skyscrapers carry this World Trade Center name, a smaller version of those that once stood in New York City.

Don’t fret Americans, if you are feeling a bit lonely, there are many resources designed just for you! Join the American Club of Brussels to meet other Americans living in Brussels through different events, sports, meals and parties. You will be happy to find out they organize a Halloween party and a Thanksgiving dinner every year, so you won’t have to miss out on these traditions while abroad. Join them on Facebook too.

The American Women’s Club of Brussels is another outlet for Americans to connect with other Americans. There are exercise classes, arts and crafts, motivational classes, baking classes, and practical resources for the whole family – a nice community for North Americans who need a support group.

If you are looking for the more business side of things, the American Chamber of Commerce in Belgium (rue du Trône 60) is one of the best business advocate organizations in Brussels. AmCham Brussels is member driven and connects all sorts of businesses within Belgium. Network with companies in Belgium, learn how American companies fit into the Belgian business sector, and explore a variety of lobbying initiatives on their website!

There's even an American Theater Company that puts the best American plays into action. This is a part of a diverse group of Anglophone theaters in Brussels. 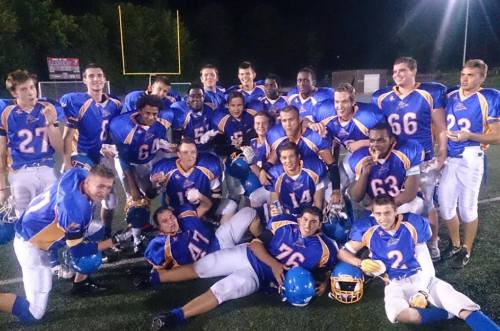 Brussels also has a baseball and softball club called the Brussels Kangaroos. Both girls and boys can participate in softball or baseball at this club in Woluwe from April to September.

Embassy of the United States

When you are an expat, it’s always smart to at least have an idea of where your country’s embassy is located. In case you haven’t had the time to check this out, BrusselsLife has your back - the United States Embassy is located at Regentlaan 27 Boulevard du Régent, B-1000 Brussels, very near the Arts-Loi metro station. The new U.S. Ambassador to Belgium, Denise Bauer, was sworn in in early August 2013.