Appeal for witnesses: who is Georgette?

Written by Olivia Regout - 14 Jul 2014, 00:00 (Updated: 12 Jan 2022, 04:32)
Dear readers, dear Brussels people of yesterday, we are calling out on you to reach back into your memory bank of the past! We are looking for information concerning a certain Georgette, the daughter of a shoe manufacturer during the time of the Liberation of Brussels in 1944. Maybe you know a little something to put us on the right track?

One morning in June 2014, the BrusselsLife editorial department received a message from England. Robb and Bruce Robinson, two Englishmen brothers from Yorkshire, explained that they are looking for their half brother who they do not know much about. Their father, William Robinson a soldier during World War II also known as “Bill”, has left very little information for his children to work with…

The story is of an encounter that goes back to World War II, during which many stories were made between foreign soldiers and locals. Bill belonged to the “Guards Armoured Division”, which entered Brussels on 4 September 1944 to free the city from its occupiers. During his time in Brussels, Bill seems to have met Georgette. Their relationship was episodic given the world conflict that was still ravaging Europe. However, Georgette later gave birth to a son.

Today, the Robinson brothers are searching for their older Brussels-born half brother. Brussels is about to celebrate the 70th anniversary of its liberation, so Bruce and Robb are trying their luck through the Belgian media. After all, you are well over 27.000 “Brusseleirs” to follow us on Facebook and more than 400.000 to read us every month. Maybe, just maybe, this story will evoke some memories for just one of you. 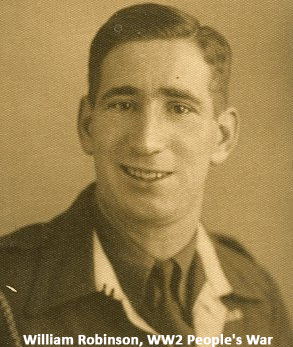 William Robinson, also known as Bill, was born February 5, 1923. When he was almost 19 years old, he went to training with the 9th Field Regiment, Royal Artillery in Harrogate. Several months later, he joined the 55th Field Regiment that included the in 1942.

Within this ranking, Bill participated in the Liberation of Brussels on September 6, 1944. He is one of the first British troops to enter the city with its people chanting their arrival. On the night of the incursion, Bill’s troops took ground on “Place des Manoeuvres” in Etterbeek.

Crédit photo : 'WW2 People's War is an online archive of wartime memories contributed by members of the public and gathered by the BBC. The archive can be found at bbc.co.uk'

His meeting with Georgette

Bill Robinson died in March 1999, and there are only hypotheses from his meeting with Georgette.

According to his son Bruce, their meeting happened as such : "on the night of the liberation of Brussels, Bill was on watch guard. While he was waiting to be replaced by a fellow soldier, who was late, out celebrating the victory, a young woman from Brussels spoke to him in a flawless English, which surprised him". This person was Georgette.

After the Liberation of Brussels, Bill and his division continued North to the Netherlands, then West to Germany. After the victory of the allies on 8 May 1945, Bill stayed in Germany until December, where he joined the Army Catering Corps. During this time, he saw Georgette several times during his time off.

After the War, the anglo-brusseleir couple unfortunately did not survive. Bill Robinson went home to Hull in the United Kinkdom to become a trawler fisherman. Several years later, he married Mrs. Robinson and had 3 children: Len, Bruce, and Robb. He didn’t see Georgette after the end of the war, but stayed in contact with her. According to his children, neither Georgette nor Bill were willing to give up their country for the other one.

Shortly before dying, Bill Robinson dug back into his past to try and find Georgette and his son… Unfortunately, he didn’t have enough time to finish his research.

What do we know about Georgette and her son?

With the little bit of information that the Robinson brothers had compiled through family conversations and their father’s confessions, they are not yet on the right track to find their brother. According to information that the sons got out of their father over the years, Georgette could have been part of a family of shoe manufacturers in Brussels and might have lived in the vicinity of the Cinquantenaire Park. She might have been a part of the Red Cross during the war, even though the organization archives have not revealed anything so far.

The son of Bill and Georgette might have been named Christian, but Bruce Robinson admits not entirely trusting his memory on the name…

If this story is familiar to you, if these names ring a bell, please do send us your information to the following address: [email protected]