This initiative got started when aerial photographs of Brussels were found in the back of a basement. The forgotten archives belonged to a former Minister. The DEP decided to share these relics of the past by proposing an interactive tool where you could trace the urbanization of the city over time.

The result was the Bruciel interface which is a dynamic map that traces year after year the development of Brussels. You can zoom in and out to check out your favorite spots. Conduct your own historic investigations of Brussels!

Bruciel is expanding after just one year of existence. The new version Bruciel 2.0 offers even more images with more than 2,000 ancient photographs from all corners of Brussels. Click on one of the patches of colors, wait a couple seconds and discover a shot of city taken from different angles and different time periods. 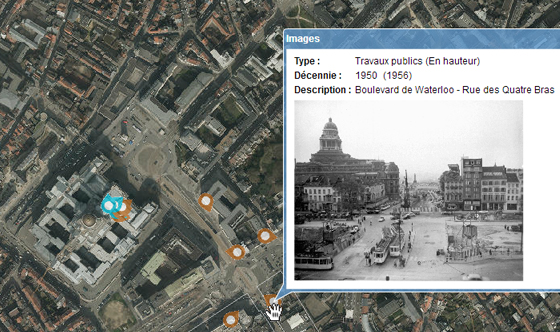 Bruciel 2.0 still lets you compare your neighborhood today with what it looked like in the past. Here are some examples of places in Brussels that have really changed a lot.

In 1953, the cheers from fans were resonating in the Heysel stadium, but the nine Atomium spheres were not yet shining in the Brussels sky. The roundabout already existed, so the construction for the World Expo 58 began!

Today Bruxelles-Luxembourg station is an underground hive of activity, but the original facade of the station was conserved on the square and is right outside the European Parliament. Inaugurated in August 1854, Bruxelles-Luxembourg is one of the oldest stations in Europe. Brussels natives have longtime called it the Gare du Quartier-Léopold (Leopold neighborhood station).

Since December 1998, the Grand-Place in Brussels has been listed as a UNESCO World Heritage site. Of course the commune officials have been looking after this architectural gem for a long time. But it wasn't that long ago that the Grand-Place was a gigantic open-air car park where traffic was completely chaotic!

The site makes it possible to survey the city with different map layers: History/Patrimony, Mobility, Residential, Institutional, Economy... All of these themes can be accessed with the label "couches cartographiques" in the menu bar. Mess around with it to see what you can find! Click on the arrow of the category that interests you and discover; most notably, the 13th and 14th century fortifications, the garden cities from the 1920s, the network of trams, the Senne river, etc.

Have fun with it! Explore and compare Brussels throughout the 20th century!