Written by Frédéric Solvel - 24 Feb 2014, 00:00 (Updated: 21 Mar 2019, 11:37)
So you won’t be playing catch-up all year long, BrusselsLife.be invites you to hop on your bike, keep up with the pack, and higher the gears. We are probably going to enter the red zone, exhausted, but we will certainly be in better shape the next time around.

At the head of the peloton, Eddy Merckx wore out his first tires in the Woluwé Park, just a couple of pedal pushes from his family’s grocer in Chant d’Oiseau. In the middle of the Place des Bouvreuils, there is a plaque that reminds us where the ‘cannibale’ acquired his thirst for victory. This plaque gets to mark Brussels as its home but lacks the charm of the one on the Stockeu hill in the Liege Province.

A meeting with the pros

As soon as cycling season starts, the pack of riders start popping up throughout Brussels. The day after the Het Nieuwsblad circuit, the Kuurne-Brussel-Kuurne heads towards the capital before circling around Ninove and charging for the edges of the Flemish Ardennes.

In the transition period between the Flemish and the Ardennes courses, the Flèche Brabançonne skirts by Brussels all day. The winner is decided after a couple of rounds around Overijse, just outside the capital.

At the end of the seasons, Brussels gets her share of cyclists with the Brussels Cycling Classic. A course born out of the annulation of Paris-Bruxelles. The start is at the Cinquantenaire and the finish line, at the Atomium, after a long loop in the two Brabant provinces. 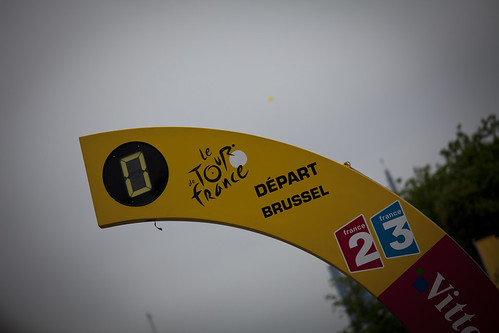 Different steps of courses have also occurred in Brussels. Just go back to 2010 when there was the finish line for one stage of the Tour de France in front of the Stade Roi Baudouin and a start the next day on the cobblestones of the Place des Palais.

Even if Brussels has many stores oriented towards city biking and for this sport in general, the mecca for cycling is located about 20 km from Brussels towards the coast. Go to Van Eyck in Alost, and you’ve hit the biking jackpot : bikes, parts, and all necessary accessories.

Among the many clubs recognized by many different federations, one has particularly caught our attention. This is not the biggest club, nor the highest rank, but it is certainly the most attractive: the Brussels Big Brackets. From the kiosk in the Bois de la Cambre, they do a course throughout the Brussels surroundings every Sunday.

For more club options, you’ve got Beauval and De Linde. Beauval is a group of nutty bikers who get out there every day, except Monday and Friday, for a 60 km ride starting from Wolvertem. The rules are simple: the pack doesn’t stop until they have crossed the finish line.

De Linde is similar. They start from the Berchem cemetery Tuesdays, Thursdays, Saturdays, and Sundays at the strike of 9 am for a 95 kilometer course in Pajottenland.

Every weekend, many bike rides are organized all over the kingdom. The most travelled are obviously the amatur versions of the Tour des Flandres and the Liège-Bastogne-Liège. Get the full schedule at gocycling.be.

As you make progress, compare your performance on the Strava app.