Last place undoubtedly goes to the Hermann-Debroux viaduct. While those who use it regularly judge it useful, this urban addition of the Namur autoroute is mostly criticized by people in Auderghem who want it demolished once and for all.  It’s only advantage: providing cover for a regular flea market.

9 – Bridge at the Palace of Justice

When taking the Boulevard de l’Empereur, we often forget that we are actually crossing this bridge that overlooks the square of the same name. The name might ring a bell because of the deal in June 2009 when the expensive initiative to put the forest of flags was taking place. When students from ULB break out into the city on November 20 to pay homage to Theodore Verhaegen with many a toast, they take a route that goes from the Sablon to the Bourse. Along the way, they cross the Place de la Justice bridge without always recognizing the hectometers to come. 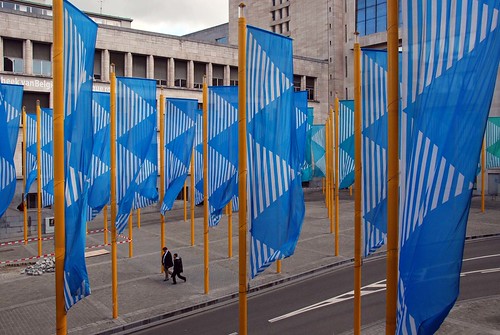 This one, young at about 30 years old, allowed the lap in the ring highway to be closed in December of 1977. Its 162 meters supported by 22 rows of pillars watch more than 150,000 cars parade by every day. Watch your speed, the limit isn’t very high around here! Coming from Zaventem and going towards Heysel, you will overlook the Brussels-Antwerp railroad tracks, the former Renault site, the Senne, and finally the canal. And if Mr. Apollinaire has tricked you with his words, we’ll set the record straight: in Brussels, the Senne flows under the Vilvorde viaduct, not under the Mirabeau bridge.

Belgian surrealism knows no limit. Thus the railroad bridge, Vanpé in Forest, was decorated with 6 cows grazing on grass flowing softly with the wind.

The Charleroi and Willebroek canals that cross Brussels are crossed by more than 20 bridges. The most famous, the star of traffic updates: the Van Praet bridge. The name might be familiar, but you may not know who exactly is this Jules Van Praet. You will no longer be caught off guard and can thrive in society thanks to the following reminder: Jules Van Praet was born in Bruges in 1806 and was the principal collaborator of the first king of the Belgians, Leopold de Saxe-Cobourg-Gotha.

The construction of the Nord-Midi train junction greatly changed Brussels’ urban landscape. This viaduct made of girders is the first link in the junction: thanks to its 6 lanes, trains leaving the Midi train station can take off into the tunnel to the Central train station. Started in 1909, the viaduct wasn’t in use until 1952. Thousands of commuters a day give this one enough of a presence to make it in the top 5! 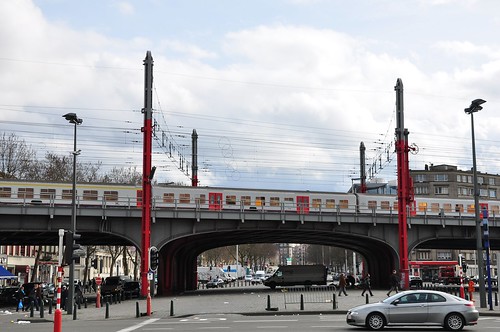 Staying in the family of girder bridges, we present the Sobieski Bridge or the Colonial Bridge. Once again we have a witness to the urban evolution of the city. At the beginning of the 20th century, King Leopold II used his money to build the Laeken park. Nothing better than a bridge to connect it to the new areas of Laeken! The sophisticated columns and visible beams give it its charm.

The last extension to the European Parliament that faces what was the Luxembourg train station is connected to the oldest buildings by a foot bridge. This was named after the former German chancellor Konrad Adenauer and jives to the rhythm of the government and parliamentary workers. Don’t hesitate to go inside the Parlamentarium as you pass through the Place du Luxembourg. 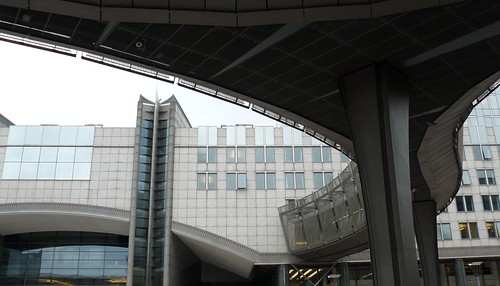 Built in 2011, the Woluwe footbridge is the linkage between different parks along this section of the green promenade. We afford this bridge with a rare elegance, given it allows cyclists and pedestrians to cross the Avenue de Tervuren in complete security. The self supporting arch and its mix of steal and wood easily justify its placement in our ranking. 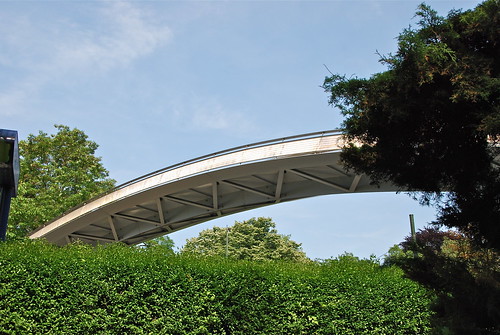 In the confines of Neder-over-Heembeek and Haren, this raised bridge goes over the Willebroek canal. It’s time to give credit where credit is due: the sumptuous metallic structure of the Buda bridge occupies our honorable number 1 spot in the ranking. Here we have a representation of the economic and industrial development of the city. It was constructed in the same location as a bridge that was destroyed during World War II. The elevated floor makes the interior port very accessible, even allowing sailboats to pass through. And it’s through the Buda bridge that the most beautiful ships can make it into the city every year for the Port Festival. 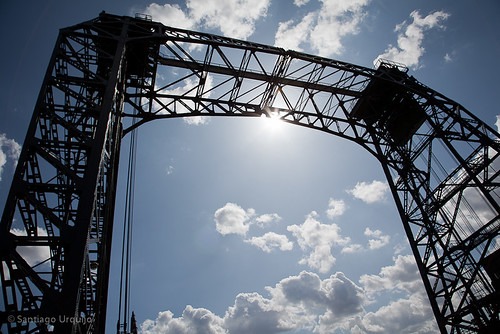 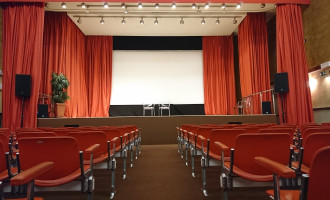