Looking back on the year in Brussels!

The year had its share of good news and bad news. Among many other things, the year in Brussels was marked by:

Have you wondered what animals were raiding your trash cans at night? In 2014, Bernard Crutzen unraveled the mystery with his movie Bruxelles Sauvage.

This year also brought along some novelties in the world of comics. The Brussels landscape is now adorned with two new frescos to join the collection: Spirou and Philippe Geluck’s Cat.  This year the Belgian Center for Comic Books turned 25 and attained museum status.

When the culture of the cacao tree becomes the object of a museum, people in Brussels head to Koekelberg to discover the brand new Belgian Chocolate Village. It’s a museum dedicated to the black gold of the Belgians: chocolate.

The year of viral events

Chantal Goya went back on tour. The pandas at Pairi Daiza were welcomed like state officials on the tarmac at Zaventem before heading to their home in Brugelette for the next 10 years. In the meantime, they became the perfect subjects for many different media outlet’s April Fool’s Day jokes. BrusselsLife couldn’t help themselves either and announced that the pandas were visiting Brussels! How is Chantal Goya still on tour?

In September, it only took a couple of hours for the entire city to go gaga. The Lady and Tony stole the show…

Brussels did not escape the international buzz: the Ice Bucket Challenge and Race the Tube made their mark in the capital of Europe. Dumping a bucket of ice water or racing the metro, up to you to choose.

November and December were all about the release of nude calendars. This year the police men of the Midi zone and the rugbywomen of Kituro took part in this particular exercise.

And so that the buzz gets around even faster, nothing beats WiFi connection on the Grand-Place.

The label made in Bruxelles showed up all year long. The tone was set as early as January with many sold-out showings of the movie Chantier des Gosses. It’s tells the story of the eleven months leading up to the Marolliens declaring war against  the projects of a real estate developer and his wife Els Amp.

From the big screen to reality – there’s only one that does it the best, one sauce to be exact. Since February 2014, sauce Dallas that had only existed in the movie Dikkenek could now accompany fries, meat balls, and fricadelles. Now the only question is: do you take your sauce on the side?

Following the rules of tradition (and fun), the cobblestones of the Grand Place became a giant flower carpet the weekend of the Assumption of even numbered years. 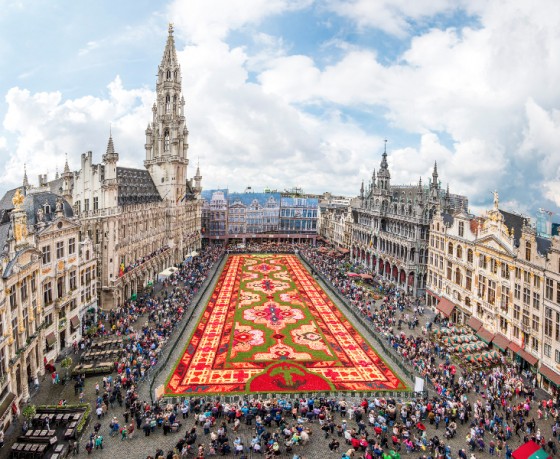 Brussels found itself an equivalent of Humans of New York. In 6 months, Just Brusseleir has already captured the portrait of 100 Brusseleirs.

We saw him on the starting line for the Brussels 20 Kilometer race in 2013 when he was only the Duke of Brabant. This year, Philippe got a time of 1 hour 58 minutes and 16 seconds as the King of the Belgians. Sadly, this edition was a race full of grief.

The craziness of the World Cup broke out in Brussels. The steps in front of the Bourse and the boulevards in the center were alive as the Red Devils advanced. It all settled when the whistle blew a little too early for this country’s liking…

Extreme sports were a thing in July with Cedric Dumont who made a great parachute dive from the top of the Up-Site tower onto the banks of the canal.

Brussels made a statement on an international scale for sports. The football Euro tournament will end here in 2020 and the deputy of sports has strong intent to host the start of the Tour de France and the European Athletics Championships.

At the end of November, the skipper from Antwerp Michel Kleinjans flew the Belgian colors high in the Pointe-à-Pitre harbor at the end of the Route du Rhum.